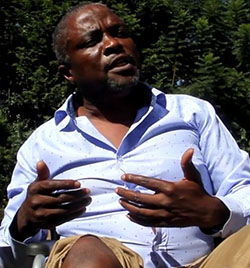 WHILE Gareth Nyandoro’s vivid, abstract depictions of commercial life in Harare, have earned him international recognition, the response of his local audience remains paramount to the artist.
His canvases depict the ephemera of everyday life — a pair of shoes, a bicycle, a rail of clothes — objects so familiar that they have become virtually invisible.
“I try to recreate situations that people don’t see as important,” he says. “I want to show them what they are missing.”
Beneath the swirling chaos of Harare’s markets, his work evokes humdrum human interactions. Discernible figures dance in and out of view amid the frenetic compositions.
“He is a keen observer of human behaviour,” says Maria Varnava, co-director of Tiwani Contemporary, a London gallery that represents international emerging and established artists.
“The arrangement of objects I find on the street [in Harare] is an artwork in itself,” Nyandoro says.
“[The traders] are very conscious of how they arrange their stalls and the objects on them. It’s very artistic for me.”
Born in 1982, Nyandoro graduated with a diploma in fine art from Harare Polytechnic in 2003 and completed his studies in creative art and design at Chinhoyi University of Technology, Zimbabwe, in 2008.
With a residency at the Rijksakademie van Beeldende Kunsten in Amsterdam and a sold-out solo show at Tiwani Contemporary already under his belt, his name is becoming well known.
He recently represented his country in the 56th Venice Bienniale and is busy preparing a solo show at Cape Town’s SMAC gallery.
“He is part of a generation of exciting young artists, like Virginia Chihota and Portia Zvavahera, who are bringing Zimbabwe to the forefront,” says Varnava.
Nyandoro agrees: “There is a lot of stuff happening here because of the economic hardship — people are making really important work. Zimbabwe is booming with creativity.”

Chequered economic past
The country’s chequered economic past includes severe bouts of hyperinflation, recession and, following President Robert Mugabe’s unsuccessful land reforms in 2001, a full-blown economic collapse. But despite ongoing deprivation — or perhaps because of it — a nascent art scene has emerged.Advertisement

“There’s not much support for the arts from the government, so people are creating work out of their own pockets,” Nyandoro says.
Zimbabwe looms large in Nyandoro’s work, though the country is rarely explicitly referenced.
“It is very difficult for me to paint other things,” he says. While in Amsterdam, he kept being drawn back home. “I was looking for things from Zimbabwe even though I was far away,” he says.
“I was kind of in between the spaces.” Keeping in touch through Facebook and YouTube, he trawled the internet for inspiration, sometimes working from stills taken from online videos. “Facebook is a place to interact. It becomes like a small kind village for me,” he says.
Printmaker by education
But what distinguishes Nyandoro from his contemporaries is his process. Behind the blocks of bold primary colour and expressive monochrome figures is an intricate, laboured form of craftsmanship. A printmaker by education, Nyandoro developed his distinctive style in part as a result of a scarcity of materials.
“When I majored we didn’t have conventional materials for etching, linocut or silk-screen printing, so we were just improvising, sometimes cutting into paper to make prints,” he says.
“But when I was experimenting, I realised the plate I was using to print was actually a finished piece of work itself.”
This makeshift approach led to the development of an expressive style of printmaking, incorporating elements of drawing, etching, painting, weaving and collage.
Dubbing his technique “Kuchekacheka”, Nyandoro slices paper cutouts with blades, painstakingly scratching out an image and stripping away layers of paper, the scraps of which are later incorporated back into the painting.
He then fills the incisions with ink that bleeds across the canvas. The process allows the artist to create images that look like etchings but can be made on a larger scale.
“I try to connect my work to its surroundings. It becomes part of the environment,” he says.
The work Nyandoro is preparing for his Cape Town show takes inspiration from the makeshift billboards in Zimbabwe.
“Signposts are a kind of artwork that the locals read,” he says.
“I recreate that because it is popular and familiar to the local people, so when they come into the space it relates to them easily. It’s all about people trying to make employment for themselves.”
This article is taken from the Financial Times.