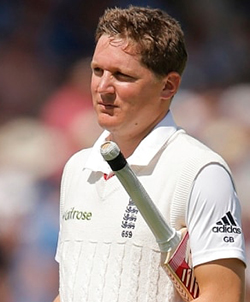 GARY Balance is Yorkshire’s new captain for all formats.
First-team coach Andrew Gale has identified the England batsman as the man to lead the county’s search for silverware in 2017 and beyond.
Ballance, 27-years-old, has played 21 Tests and 16 one-day internationals, the last of which came in the longer format in Bangladesh in October.
The left-hander was born in Zimbabwe, and he becomes only Yorkshire’s second overseas-born captain after Darren Lehmann in 2002.
He has previously skippered Zimbabwean team MidWest Rhinos and Yorkshire, the latter three times in competitive action.
The most recent was last season’s County Championship win over Nottinghamshire at Scarborough when Gale was injured.
Ballance, who averages 77.57 with the bat in nine first-class matches as captain, said: “It is an absolute honour to be named captain and to follow in the footsteps of some great captains over the years. I cannot wait to get started.
“When Andrew Gale called me, it was impossible to turn down.
“Captaining is something that I enjoy doing, and hopefully I will do a good job for Yorkshire and follow on from the good work that Galey has done over the years.
“I’m experienced now. I have played a bit of cricket over the years, so I have seen how different captains work. I think I am a calm person, and like to think I have a decent cricket brain.
“I’m not a massive speaker, but I will be looking to lead by example on the field and get the lads to follow me.”
Ballance joined Yorkshire’s Academy from Derbyshire ahead of the 2008 summer before making his first-class debut that July.
He has since scored 4,970 first-class runs for the White Rose with 15 centuries, 1,829 in List A cricket and 1,064 in Twenty20 cricket.
“I wanted to take my time when deciding who to appoint as new club captain, and Gary is the right man to take the team forward,” said Gale.
“I am a firm believer in continuity, and I am pleased to have Gary captain across all three formats.
“Gary is respected on and off the field, has a good cricket brain and knows the direction that we would like to take the team in.
“He has led from the front for many years with the bat, and his experience speaks for itself.Advertisement

“Last season, I missed a game against Nottinghamshire at Scarborough with a back injury, and Gary stepped in as captain.
“He showed great qualities as a leader, and I am excited about how he will lead the side in the future.”
It means Alex Lees’ position as the Yorkshire limited overs captain lasted just one year, with them reaching two semi-finals under his leadership.
And Yorkshire’s director of cricket Martyn Moxon is confident the appointment will be of benefit to the opening batsman as well.
He added: “Galey feels, and I agree, that one captain is the way to go.
“It is an opportunity for Alex to concentrate on his batting and make sure that he is the best batsman that he can be.
“That is important for his development – and for the team if he is stacking the runs up.
“We felt that it was only right that he didn’t have any distractions with that in mind, and he is very comfortable with that.”