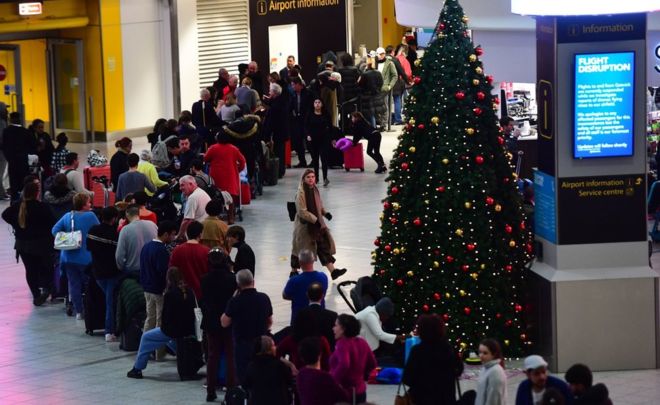 Gatwick’s runway has reopened after drones caused the airport to shut down for more than a day.

The airport, the UK’s second busiest, said 765 flights were scheduled for departure and arrival.

Boss Chris Woodroofe said police had not yet found the drone operator. Police said it was possible they were an environmental activist.

He said extra “mitigating measures” from the government and military had given him “confidence to reopen”.

Thousands of passengers remain stranded at Gatwick as police continue their search for those responsible for the chaos, which started on Wednesday night.

The airport could not operate while the drones were in flight in case they hit and damaged a plane.

Officers have so far failed to locate the “industrial specification” drones or their pilot and had been considering plans to shoot a device down.

But Steve Barry, assistant chief constable at Sussex Police, said they were in a “much better position today”.

He told BBC Breakfast there were a “number of lines of inquiry” into the “very malicious and criminal behavior”, including the possibility it could have been the work of an environmental activist.

Mr Barry said a drone had last been seen at 22:00 GMT on Thursday.

Transport Secretary Chris Grayling said there was no evidence it was terror-related.

But he called it a type of disruption “we’ve not seen before” and “lessons need to be learned”.

He said the situation was “unprecedented, anywhere in the world”.

“Every possible measure will be put in place to make sure this can’t happen again,” he said.

But he added there was “no simple solution” and “you can’t fire weapons haphazardly around an airport”.

Mr Woodroofe would not be drawn on what measures would be taken if a drone was spotted again.

But he said: “Additional mitigating measures provided by government agencies and military have given me the confidence to reopen the airport.”

Gatwick said the flights planned for Friday would have about 126,000 passengers on board. About 140 flights have been cancelled.

Mr Woodroofe added: “My intention is to get those passengers to their destinations so that they can enjoy their Christmas.”