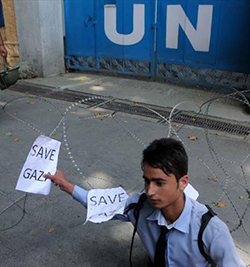 WHAT is happening in Gaza is a tragic consequence of imperial reason, coloniality, and the paradigm of war. The paradigm of war is propelled by the philosophy of ‘homo polemos’ (I conquer, therefore I am). The same logic of imperial reason, coloniality, and its paradigm of war were at play in the military invasion of Iraq and Libya that resulted in the barbaric killing of Colonel Murmur Gaddaffi and Sadam Hussein. At the centre of coloniality is a racial hierarchization of humanity which enables the ideology of the dispensable ‘other.’  Since the state of Israel was established in 1948, a paradigm of war informed by the Nietzschean will to power has reigned supreme, costing the lives of Palestinians, whose humanity has been devalued compared to those of Israelis.
It would seem that a bizarre imperial and colonial idea of ‘empty lands’ informed the establishment of the state of Israel in a region that was populated by Palestinians. The Palestinians have, since 1948, become a present which is absent. This happened at a time when the Jewish identity was being re-defined, elevating it to ‘whiteness’ as the Jews in the post-Holocaust were being enabled to migrate from the zone of non-being into the zone of being.
The long-term consequence of this re-definition of Jewish identity and its gaining of lost ontological density was the reduction of Palestinians to the zone of non-being as part of imperial and colonial justification of displacements, epistemicides, ethnic cleansing and settler colonialism at a time when the rest of the world was undergoing decolonization.
The United States of America has been complicit in this colonial arrangement. This is why even in the face of undisputable evidence of Israel’s barbaric military invasion of Gaza, the Washington administration is still parroting the notion of Israel’s right to defend itself. Even in the face of clear evidence of ethnic cleansing and application of ‘final solutions’ (genocide) in Gaza by Israel, the Washington administration is still exhibiting a disturbing and complacent view towards the conflict in which Palestinians women and children are being decimated on a daily basis. There is no doubt that Israel is conducting a barbaric earthed-scorch policy in direct violation of international law and even defying the United Nations. Advertisement

Those driven by imperial reason, coloniality, and the paradigm of war are impervious to evidence.  They are resistant to morality and ethics. They are deliberately deaf and blind to some cases of human rights violations. The Palestinians are at the mercy of this. In the context of imperial reason, coloniality, and the paradigm of war, Palestinians are defined as colonial subjects of Israel. Colonial subjects, since the dawn of Euro-North American-centric modernity dated to 1492, have been consigned to the category of sub-humans. Colonial subjects have been forced to live a hellish life in a zone of non-being. Since Hamas won elections, Gaza has been turned into a zone of non-being. It has been turned into a prison in which human life is subjected to various sanctions and punishments. Death in Gaza has been made ordinary. Ethics have been suspended. The wailing of women has been made a norm.
The discourse of anti-terrorism that gained global currency since 9/11 has not helped matters for those people like Palestinians whose humanity has been down-graded. The discourse of anti-terrorism has been used to justify all sorts of state terrorism around the world. Those formations that are struggling to free their people from present day colonial bondages are easily criminalised as terrorist organizations.
Once declared a terrorist organization, a liberation movement’s reasonable and justifiable demands fall on deaf ears. Consequently, the discourse of anti-terrorism has been used to back up imperial reason and coloniality’s justifications of deployment of the paradigm of war and selective applications of international law and ideas of human rights and democracy.
In the case of Palestine, the discourse of human rights has been silenced by the discourse of anti-terrorism. The discourse of anti-terrorism has replaced that of human rights. As a result, Palestinian women and children in Gaza have been reduced to terrorists. This is why people’s homes, schools, and mosques are targeted by Israel. Those Palestinians who have sought refuge in United Nations buildings have not been safe. It would seem Israel has been given freedom to destroy Gaza using any means at their disposal. The consequences of this complicity of the USA and the West in the decimation of the people of Gaza are too ghastly to contemplate for humanity at large.
The leading decolonial thinker Ramon Grosfoguel captured the long-term consequences of the decimation of the people of Gaza clearly. He said the killings and destruction taking place in Gaza marks the end of an era. It marks the end of the international human rights regime. It exposes the illusion of the international human rights regime. It reveals the myth of the USA project of exporting democracy. It marks the end of Zionism’s pretences to be innocent and Jewish claims of victimhood. Even more importantly, it reveals that those that imperial reason, coloniality, and paradigm of war pushed to the zone of non-being are on their own.
Gaza is indeed stark evidence of the fact that we live in a modern world system that is resistant to decolonization and a global order that is impervious to deimperialization. The consequences of this are the reincarnation of ‘final solutions’ as exhibited in the Gaza case. As modern subjects we need to relive the Universal Declaration of Human Rights’ spirit:  ‘All human beings are born free and equal in dignity and rights. They are endowed with reason and conscience and should act towards one another in the spirit of brotherhood.’
The Gaza case is a typical example of human failure to give life to the Universal Declaration of Human Rights’ very first article. The United Nations itself has failed the people of Gaza. The world is indeed descending into disorder of highest proportion where the paradigm of war is increasingly being used as a tool of resolving political conflicts with far reaching consequences for human life.
Professor Sabelo J. Ndlovu-Gatsheni is Head of Archie Mafeje Research Institute (AMRI) at the University of South Africa (UNISA).