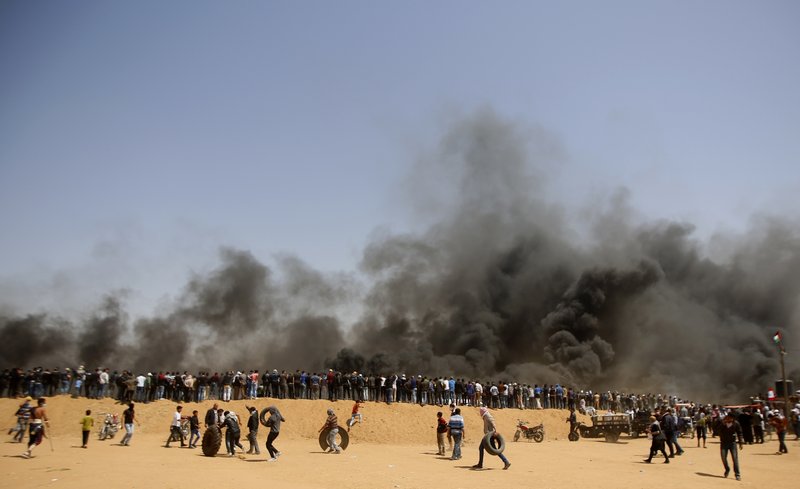 GAZA CITY: Hundreds attended the funeral of a well-known Palestinian journalist in Gaza on Saturday who was killed while covering mass protests along the Israeli border the previous day.

Yasser Murtaja died from a gunshot wound he sustained while filming Friday in an area engulfed in thick black smoke from protesters setting tires on fire. Israeli troops opened fire from across the border, killing at least nine Palestinians and wounding 491 others in the second mass border protest in eight days. The deaths brought to at least 31 the number of Palestinians killed by Israeli fire since last week. The border area appeared calm Saturday.

Witnesses said Murtaja was over 100 meters (yards) from the border, wearing a flak jacket marked “press” and holding his camera when he was shot in an exposed area just below the armpit.

The Israeli military has said it fired only at “instigators” involved in attacks on soldiers and was investigating Murtaja’s death amid a very hectic environment.

“(Israeli Defense Forces) troops are operating in accordance with clear rules of engagement that are tailored to this scenario. The IDF uses means such as warnings, riot dispersal means, and as a last resort firing live rounds in a precise, measured way,” it said Saturday. “The IDF does not intentionally target journalists. The circumstances in which journalists were allegedly hit by IDF fire are not familiar to the IDF, and are being looked into.”

Hamas, which has ruled Gaza since a 2007 takeover and calls for Israel’s destruction, has called for a series of protests until May 15, the anniversary of Israel’s founding when Palestinians commemorate their mass uprooting during the 1948 war over Israel’s creation.

The Islamic group hopes the mass protests can create pressure to break a border blockade enforced by Israel and Egypt since 2007, without having to succumb to demands that it disarm. The blockade has made it increasingly difficult for Hamas to govern. It has also devastated Gaza’s economy, made it virtually impossible for people to enter and exit the territory, and left residents with just a few hours of electricity a day.

Israel argues that Hamas could have ended the suffering of Gaza’s 2 million people by disarming and renouncing violence.

It says Hamas is exploiting the mass marches as a cover for attacking the border fence, and has vowed to prevent a breach at all costs. The military said that on Friday protesters hurled several explosive devices and firebombs, using the thick plumes of smoke from burning tires as cover, and that several attempts to cross the fence were thwarted.

Although colleagues said Murtaja was not affiliated with Hamas or any other militant group, Hamas chief Ismail Haniyeh attended the funeral Saturday.

“The Return March is a battle of truth and awareness,” Haniyeh said of the protests. “Yasser held his camera to direct the arrows of truth to convey the image of the besieged people.”

At the funeral, Murtaja’s body was draped in a Palestinian flag with his flak jacket reading “press” placed upon him as he was carried through the streets of Gaza. The drone he had used for shooting footage for Gaza hovered above to film his funeral. Dozens of his close friends and colleagues were sobbing after the coffin was taken out of the morgue.

Murtaja, 30, was the co-founder of Ain media, a local TV production company that has done projects, including aerial drone video, for foreign media clients such as BBC and Al Jazeera English.

Murtaja was one of the first to bring a drone camera into Gaza and his images captivated many of its residents who have never seen Gaza from above since it has no airport or skyscrapers.

His death, along with the other recent casualties, seemed likely to draw renewed criticism from rights groups that have branded Israel’s open-fire orders on the border as unlawful, after Israel’s defense minister warned that those approaching the fence were risking their lives.

AIDA, a network of more than 70 non-government organizations operating in the Palestinians territories, condemned Saturday what they called “the unlawful killing of civilians” Friday. It follows accusations from the United Nations’ human rights office that it has indications of Israeli forces using “excessive force” the previous week.

Three other journalists sustained tear gas injuries and at least one cameraman a gunshot in his leg, health ministry and media activists reported.

Witnesses described the area in which Murtaja and others were shot as a chaotic scene in which protesters torched large piles of tires, engulfing the area in black smoke that was meant to shield them from Israeli snipers. Footage showed that visibility was limited and the faces of some of the activists were covered in black soot.

Israeli troops on the other side of the fence responded with tear gas, rubber-coated steel pellets and water cannons, as well as occasional live fire.

Just two weeks ago, Murtaja posted a drone photo of Gaza’s seaport at sunset on his Facebook page with the following caption: “I wished I could take this photo from the sky, not from land. My name is Yasser Murtaja, I am 30 years old. I live in Gaza City. I have never traveled.”

Hana Awad, his colleague and close friend, said he had long dreamt of traveling and was recently granted an Al Jazeera scholarship for training in Doha. She described him as active and friendly and not at all interested in politics.

“We didn’t know his political views, he was passionate about his job and wanted to travel and learn,” she said of Murtaja, who was the father of a 2-year-old boy.