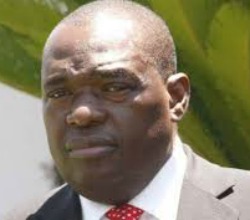 NEWLY APPOINTED Foreign Affairs Minister Sibusiso Moyo said his mandate has a heavy economic bias and he intends to pursue “comprehensive economic diplomacy” with a focus on exploring new investment frontiers and partnerships.
Speaking at a press briefing after his interaction with Heads of Diplomatic Missions accredited to Zimbabwe in Harare Thursday, Moyo said he will ensure that Zimbabwe is an attractive investment destination.
He also appealed to Zimbabweans living abroad to venture into businesses back home and promised that their investments will be “facilitated”.
Moyo also said his “economic diplomacy” will ride on the successes and accomplishments of the past, re-alignment in other areas and a complete departure from frustrations and failures of the past.
Reports say there are more than 3 million Zimbabweans living abroad most of them as economic refugees who left the country due to company closures and the economic meltdown.
“I shall ensure that the full potential of all our nationals abroad (diasporans) shall be marshalled to encourage their full participation in economic activities and that their consular needs are fully attended to,” said Moyo.
“Their investment back home will be facilitated.”
“We shall roll out a dynamic public diplomacy in which citizen activism will greatly feature, individually or through their organised bodies.”
Minister Moyo added, “Business and the organisations which represent them shall also be our key partners and stakeholders in our economic diplomacy.”
“The individual actors will be encouraged to pursue their visions.”
Advertisement