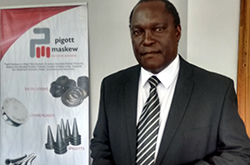 GENERAL Beltings Holdings says the mining sector struggles have hit its operations hard, resulting in a $471,000 net loss in the six months to June 30, lower than the $818,000 incurred in the same period last year.
Revenue was 47 percent higher at $2,2 million from $1,5 million last year but operating expenses also rose 33 percent to $1,56 million.
Its short term and long-term debt stood at $1 million compared to $1,1 million last year and it paid $142,000 in financing costs, 18 percent more than previously due to additional borrowings to finance its order book during the six months.
The funds are owed to the Central African Buildings Society (Cabs) and FBC Bank which attracts interest rates of 10 percent and 22 percent per annum respectively, the company said on Tuesday.
Its rubber division saw turnover grow 184 percent to $1,3 million due to higher demand as companies bought local. The chemicals division saw its turnover fall 14 percent to $900,000 as demand remained depressed.
Managing director Willard Tsuro said the company had clinched a deal with Zimbabwe’s biggest platinum producer Zimplats to provide specialized fire resistant and anti-static conveyor belts, which allowed it to improve production levels and its capacity utilisation to 66 percent.
Protective measures taken by government in the mid-term fiscal review to restrict imports could yet help its recovery, but the implementation is still in infancy, the company said.
It expects an improved performance in the second half as companies start scheduled plant maintenance.Advertisement