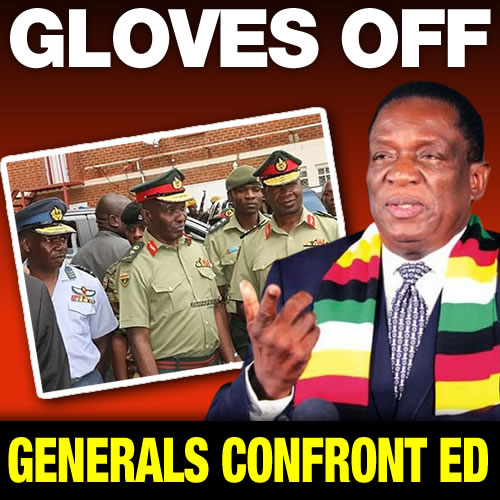 TOP army commanders confronted President Emmerson Mnangagwa at the weekend demanding the conferment of national hero status on the late former Zimbabwe National Army Major General Godfrey Chanakira, forcing him to make a dramatic U-turn on his earlier decision in which he had merely granted him a state assisted funeral, emerging details show.

Chanakira, a liberation war hero, was working as a permanent secretary in Chiwenga’s office at the time of his death from a heart problem last week.

Mnangagwa on Friday announced he had granted him a state-assisted funeral instead of the national hero status, a decision which sources said left army chiefs shocked given a standing agreement that any soldier from the rank of brigadier general upwards would automatically be declared a national hero upon his/her death.

Sources said Mnangagwa initially denied Chanakira the national hero status on the basis of his perceived allegiance to his internal Zanu PF and government nemesis.

The two 2017 coup protagonists are embroiled in a messy fight over unresolved leadership issues.

The sources said Mnangagwa may have made the decision in order to fix Chiwenga after they met at Chanakira’s residence to pay condolences.

He is said to have also remarked that while he knew the party had its own processes but Chanakira’s works spoke for themselves and there was no way he could be denied the national hero status.

A source quoted Chiwenga as saying: “His works, in service of his country, are there for all of us to see. He is a national hero. But we have internal processes in the party that we have to follow and a meeting will soon be held, that could be tomorrow or a day after, to see which honour is most consistent with his work.”

But Mnangagwa, shortly thereafter, went on to grant Chanakira the state assisted funeral.

“The truth is that the generals were shocked by the decision to grant him only as state assisted funeral and visited him at State House over the weekend to demand a review of the decision. They indicated to him that it was too belittling to grant him just a state assisted funeral when he was such a distinguished liberation hero and died serving the country,” an official source said.

In announcing Mnangagwa’s embarrassing volte-face, Chief Secretary to the office of the President and Cabinet Misheck Sibanda said: “The late Major General Godfrey Chanakira (Rtd) whose chimurenga name was comrade Garikai Musavengana who had been granted a state assisted funeral has now been declared a national hero following further consultations. Burial arrangements will be announced in due course.”

Interestingly, Chanakira was one of the numerous generals whom Mnangagwa retired from the army after he assumed power in the immediate aftermath of the November 2017 cou.

They include the later former Zimbabwe National Army chief-of-staff, the late retired Lieutenant-General Douglas Nyikayaramba who was posted to Mozambique and former head of presidential guard Ansleem Sanyatwe, who is now Zimbabwe’s ambassador to Tanzania.

The move to retire them was widely seen as a coup proofing measure.