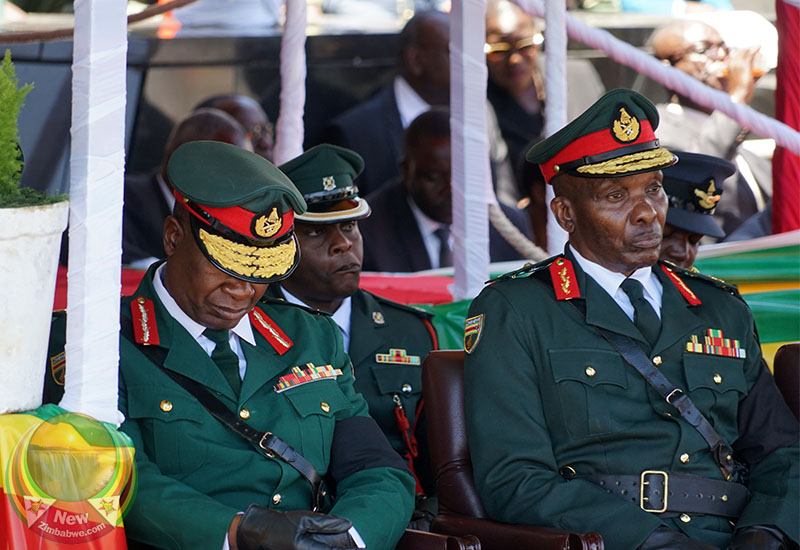 ZIMBABWE National Army (ZNA) commanders have convened several meetings over the past few weeks as they battle to contain rampant indiscipline among soldiers, characterised by the involvement of junior officers in high profile criminal activities like armed robberies as well as theft of rations, NewZimbabwe.com can exclusively reveal.

This comes amid reports of heightening disquiet within the rank and file of the military, largely because of the worsening economic crisis which has left most low-ranking officers impoverished.

According to military sources, the meetings are being convened by the utmost decision makers in the ZNA and, at a recent one held last week, it was resolved that stern punishment should meted against those caught on the wrong side of the law using internal army disciplinary and paralegal systems.

Sources said there was general concern among ZNA commanders that the level of indiscipline may spiral out of control and could further degenerate into mutinous behaviour if left unchecked.

The generals, sources added, have in these meetings openly expressed concern that the deteriorating economic situation in the country, underpinned by skyrocketing prices, high cost of living, has pushed the soldiers into a desperate condition: ill-disciplined, disorganised, poorly fed and poverty stricken which is a perfect recipe for worse things.

To survive the hardships, the soldiers have had to engage in money-spinning activities such as gold panning and street vending while others have turned to crimes like theft.

But nothing has jolted them into a panic mode more than the growing cases of soldiers getting involved in armed robberies.

“What is particularly troubling the generals is that some of these officers are part of the military’s elites and responsible for securing dignitaries. This has really worried the command element and meetings have been held to try and see what can be done to end the problem,” a source said.

“The command element’s concerns are largely over repeated acts of indiscipline by soldiers. Reports have been filtering in about members involved in crimes committed both within and outside the organisation. There are also cases whereby soldiers are involved in other activities in order to survive, for instance their involvement in activities such as gold panning, theft of rations and now armed robberies.”

“I am sure you have heard cases of soldiers who have been caught in violent clashes with illegal gold diggers and in armed robbery incidents. These have been increasing a lot and sometimes we only get to know that they are our members once they have been arrested. So this was one of the issues that was being addressed in these meetings.  What I can say is that things are not well at all these days,” the source said.

“The top people do acknowledge that the solution is not only found within the military, but there is a political solution to it. For instance, the solution to the economic problems which are causing all these issues need to be politically addressed and it was resolved that the army-civil relations department must take charge of the process of engaging the political leaders to alert them to the dangers facing the country if the economy is not fixed,” the source further said.

ZNA spokesperson Colonel Alphios Makotore confirmed that the meetings have been held but declined to divulge the details saying: “We do not share with the media outcomes of our meetings.”

He referred questions on the involvement of soldiers in criminal activities to the police.

“Armed robberies by their nature are acts of criminality and crime is the domain of the police. You are therefore advised to contact the Zimbabwe Republic Police (ZRP),” Makotore said.

Just last week a Presidential Guard army officer, Arnold Matetepa, was injured in a shootout with police during an alleged armed robbery incident. He managed to escape but was later arrested as he sought medical assistance.

His accomplices, still at large, got away with US$2 500 and valuables.

Another soldier from the 1 Commando regiment, another elite branch, Corporal History Sibanda, was arrested in Beit Bridge alongside a fellow state security agent, Constable Shepherd Gatsi after they allegedly robbed a businessman of R95 000 and 30 boxes of export cigarettes.

Zvidozvashe Dzuda, another army officer stationed at its Ordinance Directorate was in court recently after, alongside accomplices, he allegedly robbed Gateway School in Harare of US$25 000 and blew the institution’s safe open in search of valuables.

He is accused of having led a gang that robbed Chinese national and cannabis farmer Weng Dong of US$22 000.

A few weeks ago Chamunorwa Gingi of 2 Brigade was in the docks on similar allegations, having gotten away with US$60 000.

“It is, indeed, true that most of these cases of armed robberies are being done by armed men and women from the police force as well as the army. I would like to emphasise and indicate that government is, indeed, working on that, but I would also like to indicate that such cases have decreased,” said Kazembe in Senate.

With a salary equivalent to just US$100 or less, civil servants are generally struggling to make ends meet as their wage is just a fraction of the Poverty Datum Line (PDL) of $34 626 for a family of six, currently estimated at US$350.