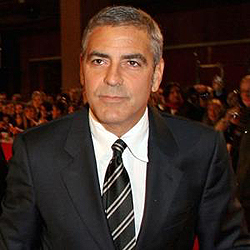 George Clooney has donated $1m to combat war crimes and corruption in Africa.
The Clooney Foundation for Justice on Wednesday announced the gift to the Sentry, an investigative initiative that Clooney co-founded to uncover the financial networks behind conflicts in Africa. In a statement, Clooney said the group’s focus is “to make sure war crimes don’t pay.”
Clooney’s grant, along with others, including one from actor Don Cheadle, totaled $3.45m for a fundraising campaign.
The Sentry said the money will help fund reports in the coming year on “state looting and illicit financial flows out of the war-torn countries of South Sudan, Sudan, Democratic Republic of Congo, Somalia and the Central African Republic.”
Clooney and human rights activist John Prendergast founded the Sentry in 2015.Advertisement