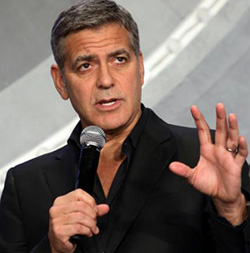 GEORGE Clooney has said he believes it is up to society to elect politicians who they believe can give us all a brighter future.
The Hollywood heartthrob signed autographs and posed for selfies in Leicester Square Sunday at the premiere of his new film Tomorrowland: A World Beyond.
The 54-year-old actor was joined on the red carpet by British actor Hugh Laurie, who plays the villain in the Disney movie, and their young co-stars Britt Robertson and Raffey Cassidy.
The sci-fi adventure, directed by Brad Bird, was inspired by the futuristic land at the Disney theme parks and Walt Disney’s optimistic vision of a utopian future.
Clooney plays Frank Walker a former boy-genius inventor in the adventure movie who has become jaded about the future of the world, until he teams up with a teenage girl who is determined to save it.
Clooney, who is rumoured to be planning a move into US politics, said: “I do believe that’s how we work it out – politicians are elected by us, so we as a collective can always make things better and we always have.
“I really do believe that every time things seem very bleak, and I believe that they look very bleak right now, we figure it out. We have to, that’s how society moves forwards.”
Clooney, who married human rights lawyer Amal Alamuddin last year said he feels happier about life since tying the knot.
“I’m a happily married man,” he said. “I’m very happy.”
But he dodged any questions about starting a family of his own.
Comedian and blues singer Laurie, 55, plays scientist David Nix, the villainous scientist who has given up on the world.
But Laurie revealed he has become a more optimistic person as he grows older.
He said: “For me it was the other way round. I was a rather gloomy sort of kid, and I think I’ve got more optimistic as the years have gone by.
“It’s partly an effort of will. I think to a degree we all have the power to change it, what we think about the future and what we think about the world, and I’m trying as hard as I can to be a sunnier person than I was.”Advertisement