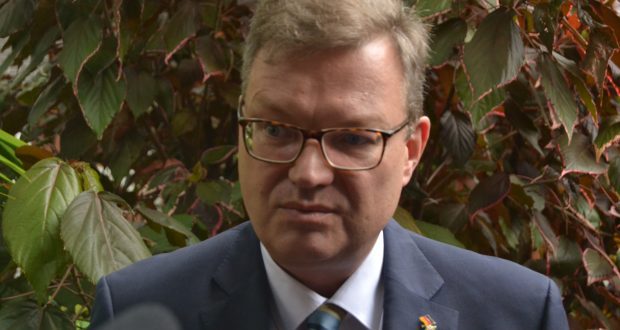 GERMAN investors are keen on Zimbabwe but their decisions will be heavily dependent on the outcome of the general elections slated for July or August this year, Ambassador Thorsten Hutter has said.

Hutter made the remarks in an interview with New Zimbabwe on the sidelines of the official opening of the Future Africans Visions Exhibition in Harare Thursday evening.

“We had a business delegation here and the delegation had a number of meetings with government and business representatives and my impression is that they are interested, they are certainly watching how the events unfold because the elections will certainly tell better what the way forward is. And then we will have to take it from there,” he said.

He said the coming in of President Emmerson Mnangagwa had presented Zimbabweans with an opportunity to decide their own future through credible, free and fair elections.

“There is a new president; there is a new way of thinking. There is a new outreach to the society, to NGO’s to the business community and to the international partners, which is something that we think is extremely positive.

The German envoy said the European Union election observer mission which was recently in the country had had positive interactions with representatives from the government, the Zimbabwe Electoral Commission, political parties and NGO’s.

Ambassador Hutter said it was important for any serious government to prepare the future of its people.

“The future is something that you say everyday so if you sit down today and say everything is fine then you cannot shape the future any longer so you will fall behind,” he said.

He said although a lot still needed to be done in Zimbabwe, there was definitely progress in efforts to move the country forward.