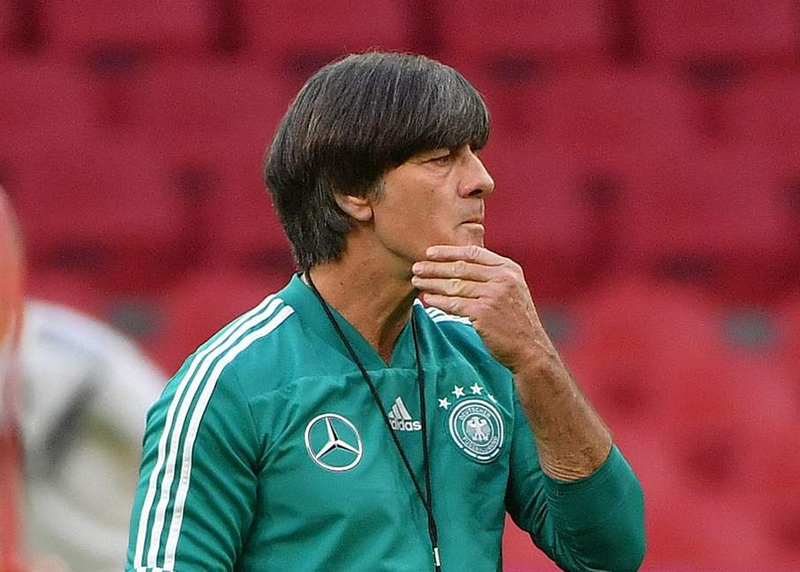 The future of Germany's head coach Joachim Loew hangs in the balance after the 3-0 hammering by the Netherlands in Amsterdam on Saturday was the fifth defeat suffered by the Germans in 2018, equalling their worst record in a calender year.
Spread This News

THE German press turned on Joachim Loew after the hammering by the Netherlands left the future of Germany’s head coach in doubt with world champions France looming on Tuesday.

“Not at the moment,” Loew replied in the post match press conference when asked if he can still decide his future following the 3-0 drubbing – Germany’s heaviest defeat to the Dutch.

Dutch captain Virgil Van Dijk gave the hosts a first-half lead before late goals by Memphis Depay and Georginio Wijnaldum capped a golden night for the Oranje in Amsterdam.

“That was a brutal and disappointing defeat, especially as we had the game under control in the first 30 minutes,” said Loew, whose contract runs until 2022.

“At the moment, you can literally feel that we do not have the self-confidence that we used to have.”

It could have been 4-0 as Depay also hit the crossbar in the dying stages as the German defence collapsed in the last 10 minutes.

If Loew’s side loses to world champions France in Paris on Tuesday, it will mean a record sixth defeat for Germany in a calender year, which Loew can ill afford.

Having steered Germany to the 2014 World Cup title, Loew was irritated when asked if the heavy defeat was his 168th — and final — international.

“For me, or what?” he replied, flustered, with his 12-year reign in peril.

“We need to move on quickly (to the next question), I am the wrong person to talk to about that.”

He only signed a new contract with the German Football Association (DFB) in May until the next World Cup, yet unless results improve, it is doubtful he will see it through.

After the World Cup debacle, when Germany crashed out after finishing bottom of their group, the Germans again find themselves last in their Nations League pool.

The Germans must win their last two games, against the French on Tuesday and Dutch in Gelsenkirchen on November 19, or risk relegation in the competition’s debut season.

Germany goalkeeper Manuel Neuer leaked three goals over 90 minutes for only the second time in 81 international appearances during Saturday’s heavy defeat in Amsterdam.

Back home, Germany’s main newspapers were brutal with the head coach.

“Bottom marks for Loew! Irritation after questions over his future as a national coach,” was the verdict of Germany’s top-selling daily Bild.

Football magazine Kicker pointed out that despite Loew’s promises of a fresh start, little has changed.

“After the 3-0 debacle, the German team is fighting relegation. This is not a snapshot, but the logical consequence after a series of mistakes.

“It raises – again – the question of the future of coach Joachim Loew.”

“An evening to scare,” said Munich-based Sueddeutsche Zeitung, who reported on Saturday that Loew’s contract contains a clause allowing either party to terminate it early.

For a proud football nation, top newspaper Welt pointed out an uncomfortable truth, “3-0 defeat to the Netherlands – Germany is just a mediocre European nation”.

“Loew must break away from his base of World Cup winners,” commented the paper, echoing what many fans feel.

“Loew is slowly running out of arguments. He must react – the team needs new impulses.”

Germany winger Leroy Sane fired wide with a clear chance against the Netherlands after the Manchester City starlet came on for the second-half in Amsterdam.

Hummels, who has made a habit of attributing recent defeats to others, this time blamed the forwards as Timo Werner, debutant Mark Uth, Mueller and his second-half replacement Leroy Sane wasted chances.

However, Loew blamed his senior players for not reacting.

“You can see the confidence is missing after the last few months, we have lost our way,” he admitted.

“In the last 10 minutes, players have to take responsibility and not run around like headless chickens.

“We brought this bitter defeat on ourselves.”