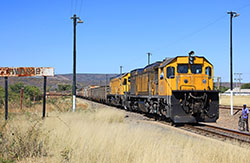 THE National Railways of Zimbabwe (NRZ) has launched an adventure holiday steam charter in partnership with a German safari company.
NRZ is currently in the process of wooing investors to revive its operations which have deteriorated over the years due to lack of funding from government.
Six private investors, China Civil Engineering and Construction, Transnet of South Africa, SMH Rail Malaysia, Crowe Horwath and Sino Hydro have entered into a bidding race to secure a $400 million tender to recapitalise the parastatal.
The German safari company, Far Rail Services, recently entered into an agreement with NRZ to use the latter’s steam locomotives to run an international tourist steam train.
It becomes the second foreign company after Geoff Cook Safaris of the United Kingdom which has been chartering steam locomotives from NRZ for some years now.
Far Rail Safaris ran its inaugural seven day excursion from July 10 to July 17 from Bulawayo to Victoria Falls.
NRZ Public Relations Manager, Nyasha Maravanyika, says international tourists are drawn to the steam train safaris because of the uniqueness of the NRZ’s steam locomotives.
“Steam train enthusiasts normally look for a particular type of steam locomotive – the Garrat steam locomotive which is articulated into three parts: the boiler mounted on the centre frame and two steam engines are mounted on separate frames, one on each end of the boiler.
“NRZ steam locomotives are a draw card for steam enthusiasts because the organisation is the only operator in the world still operating Garrat locomotives in their original state and enthusiasts are prepared to pay huge amounts of money and travel long distances for the experience,” said Maravanyika.
He added that the safari trains have given a huge boost to the local tourism industry as the visiting tourists usually book into local hotels during their stay and also visit local sites.
Following the success of the Far Rail Safaris, Maravanyika said the NRZ will come up with strategiesto build on the popularity of steam train and organising more tours.
Advertisement