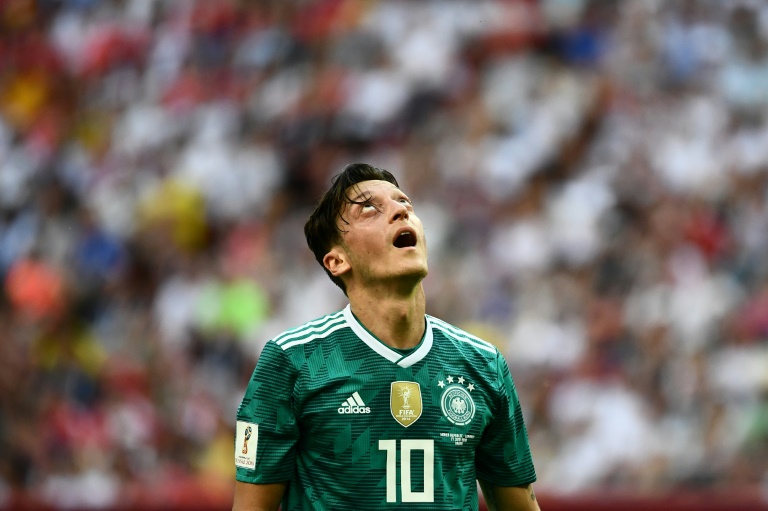 Holders Germany sensationally crashed out of the World Cup on Wednesday in one of the biggest shocks in the tournament’s history — failing to make it past the opening round for the first time since 1938.

In a stunning reverse by the footballing superpower who have reached either the final or semi-finals of every World Cup since 2002, the Germans stumbled to a 2-0 loss to South Korea that left them rooted to the bottom of Group F.

Germany went into the game knowing that a win by two clear goals would have seen them into the last 16. But instead it was Sweden and Mexico who advanced after the Swedes romped to a 3-0 win over the Mexicans in Yekaterinburg.

“The disappointment of us being eliminated is just huge,” said Germany coach Joachim Loew, who is now under pressure to quit despite signing a contract extension until 2022 last month.

“It’s too soon for me to answer, it will take a few hours to see things clearly, the disappointment is very deep in me,” the 58-year said when asked if he would resign.

“It is a really, really bitter evening for us,” defender Mats Hummels added. “The situation is very difficult to put into words.”

“We had plenty of opportunities, we broke our necks trying out there today,” he added.

Germany qualified for Russia with a perfect record of 10 wins, but Hummels said the team had not played well since they wrapped up qualification late last year.

Hummels said the warning signs had been there after Germany lost their opening game 1-0 to Mexico.

“We put ourselves in this situation after the Mexican game,” he admitted. “The last game we delivered a good performance was in the autumn of 2017.”

Sweden coach Janne Andersson spoke of his immense pride after his side topped the group with second-half goals against Mexico from Ludwig Augustinsson, Andreas Granqvist and an own goal from Edson Alvarez to move into a last-16 meeting with Switzerland.

“I’m so incredibly proud, almost moved as the thought of how we performed on the pitch, so disciplined. I think we’ve grown since our last match.”

Andersson said he refused to take any pleasure in the demise of the Germans whom he had accused of distasteful celebrations when they beat Sweden.

Paulinho was fed by Philippe Coutinho to open the scoring

Brazil beat Serbia 2-0 to top Group E and cruise through to a last-16 meeting with Mexico.

Philippe Coutinho’s sublime pass was converted by Paulinho in the 35th minute and Thiago Silva powered in a second-half header at the Spartak Stadium in Moscow.

The Brazilians had to soak up spells of intense pressure from Serbia but finish unbeaten in the group stage.

After failing to fire in their opening match in Russia, a 1-1 draw against Switzerland, Brazil appear to be finding their normal fluency with each match as they go in search of a sixth World Cup. The Mexicans will need to regroup fast before facing them in Samara on Monday.

Mladen Krstajic’s talented Serbia team will always wonder what might have been. They will inevitably point to the disallowed penalty in the highly-charged 2-1 defeat to Switzerland when Aleksandar Mitrovic was wrestled to the ground as the point when their World Cup went awry.

Switzerland joined Brazil in the second round as runners-up after they drew 2-2 with Costa Rica in Nizhny Novogrod.

The Swiss will face the Swedes in Saint Petersburg on Tuesday but must do so without captain Stephan Lichtsteiner who will be suspended after picking up a yellow card.

A 93rd minute own goal by the unfortunate Yann Somer from a Bryan Ruiz penalty gave the central American side a deserved 2-2 draw on a night of late drama.

Earlier Blerim Dzemaili had thumped home to give Switzerland the lead against the run of play against the team which finished bottom of Group E.

That goal was cancelled out by Kendall Waston’s header in the 56th minute, the central Americans’ first goal of the tournament.