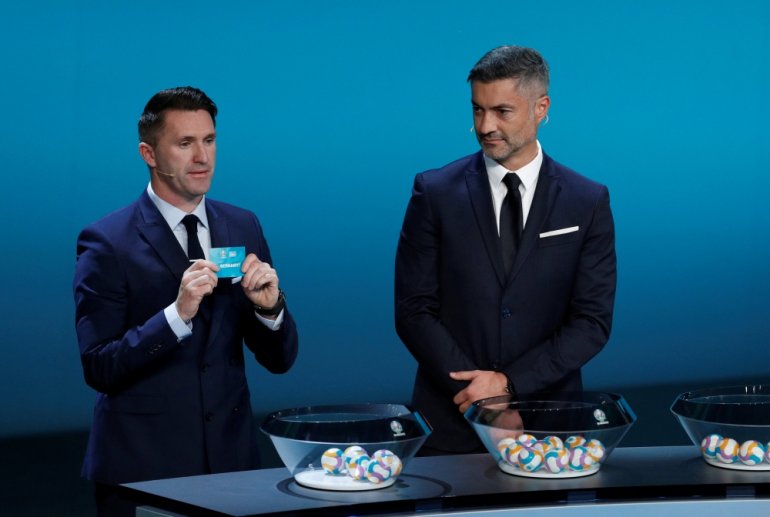 Former champions Germany and the Netherlands will meet again in qualifying for Euro 2020 after being paired together in Sunday’s draw in Dublin, but World Cup semi-finalists England have little to complain about.

The Germans were the most dangerous team in the second pot of seeds having been relegated from the top tier of the Nations League, in part due to a 3-0 defeat to the Dutch in October.

Germany open their campaign by travelling to the Netherlands on March 24 before hosting their neighbours on September 6.

Northern Ireland, Estonia and Belarus are the sides tasked with causing a huge upset in Group C.

However, with the top two teams in each of the 10 groups qualifying automatically for the 24-team tournament, which will be held for the first time across 12 different host countries, there is little prospect of any leading nation missing out.

The remaining four places will be allocated via the Nations League play-offs.

“The group is typically tough,” said Germany head coach Joachim Loew, who is under pressure to bounce back after also crashing out at the group stage of the World Cup.

“The Netherlands and Germany are the favourites, but it should be enough for both (to go through).”

A young Netherlands side are improving under Ronald Koeman after failing to qualify for both Euro 2016 and this year’s World Cup. And with Amsterdam one of the host cities, Koeman insisted qualifying rather than claiming another victory over Germany is his priority.

“If you look back how it was one year ago and how the public were with the national team, it is totally different at this stage,” said Koeman, who has led the Netherlands to the final four of the Nations League.

The semi-finals and final will be played at Wembley, handing England a major incentive to win the European Championship for the first time after their run to the last four at this year’s World Cup.

There is little for Gareth Southgate’s side to fear in Group A as after starting with a home game against the Czech Republic on March 22, England also face Bulgaria, Montenegro and Kosovo.

But Southgate called on his team to get used to dealing with high expectations.

“Once you are seeded then inevitably the draw is one you should be in charge of,” said Southgate.

“It’s up to us. We’re favourites and that’s something we’ve got to get used to anyway.

“We have high expectations over the next few years and adapting to that is probably key to our development as a team now.”

World Cup winners France will meet Iceland and Albania, who they beat on their way to the Euro 2016 final, as well as Turkey, Moldova and Andorra in Group H.

“For every country playing France, the world champions, it is obviously an honour for them.”

Belgium and Russia lead the way in a tough-looking group for Scotland alongside Cyprus, Kazakhstan and San Marino in Group I.

Portugal will be confident of having the chance to defend their title despite some tricky trips to Ukraine, Serbia, Lithuania and Luxembourg.

Spain will look to bounce back from a disappointing end to their Nations League campaign in what should be a comfortable section for the three-time European champions with Sweden, Norway, Romania, the Faroe Islands and Malta.

“On paper you can think we are favourites but we need to show that where it’s difficult, on the pitch,” said Spain coach Luis Enrique.

The draw hosts Republic of Ireland benefited from a rule that only two of the 12 hosts for the final tournament could be drawn in the same qualifying group as they avoided the Netherlands and Germany. Neighbours Northern Ireland took their place.

Instead, new Republic manager Mick McCarthy will meet Switzerland and Denmark in Group D as well as Georgia and Gibraltar.

The qualifiers begin in March, with the final round of games in November 2019.