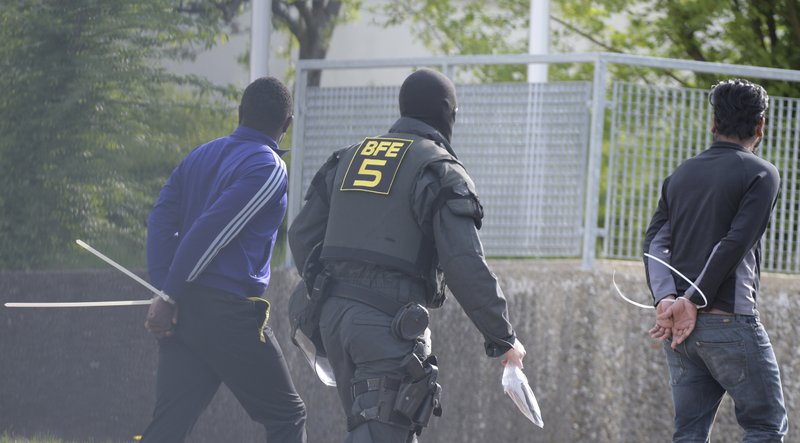 BERLIN Hundreds of German police officers raided a refugee shelter in the southern town of Ellwangen on Thursday, days after an angry mob of migrants prevented authorities from deporting a 23-year-old man from Togo.

Interior Minister Horst Seehofer vowed he would do everything he could to clamp down on illegal immigration, speed up asylum procedures and deport rejected asylum-seekers as quickly as possible.

“What happened (in Ellwangen) was a slap in the face of the law-abiding population,” Seehofer — who is well-known for his law-and-order stance — told reporters in Berlin.

“The right to hospitality cannot be trampled on like that,” he added, promising that security authorities would “use all their force and determination” to prosecute those asylum-seekers who blocked police from executing the deportation Monday in Ellwangen.

Bernhard Weber, deputy police chief in the town of Aalen near Ellwangen, said the big police operation was necessary because of the “unprecedented” situation officers had faced when they arrived to pick up the Togolese man.

“They were massively prevented from doing so, violently, by about 150 to 200 African refugees,” Weber told reporters.

Weber said a decision was taken to return early Thursday to enforce the deportation of the man to Italy, which he passed through on his way to Germany. Under European Union rules, people have to apply for asylum in the first EU nation they enter.

Four people including one police officer were taken to the hospital for injuries suffered during the raid Thursday, while eight others were treated by paramedics at the scene.

Seehofer, the governor of Bavaria before he joined Chancellor Angela Merkel’s new government six weeks ago, said he wants to quickly implement new procedures to limiting the overall number of asylum-seekers in Germany. He also vowed to do everything possible to deport criminal and extremist migrants faster.

As part of new plan, the German government wants to place asylum-seekers in several centralized centers with up to 1,500 other migrants for up to two years. They will not be distributed across the country before their application has been processed.

Judges will be working inside these centers and if they reject asylum-seekers, those failed candidates will be deported straight from there. In addition, Seehofer wants to increase the number of holding facilities for deportees to prevent them from evading deportation.

Asylum-seekers are currently housed in smaller shelters all over Germany while they await their asylum decision. Some migrants go into hiding after being told of their upcoming deportation, delaying the process.

Seehofer said he also wants the German government to declare several nations — including Morocco, Tunisia and Algeria as well as Georgia — as “secure home countries,” lessening the chances that applicants from there will be granted asylum.

Those who do receive asylum will need to integrate better into German society, Seehofer said.

Seehofer belongs to the Bavaria-only Christian Social Union, which has always taken a harder line on migration than Merkel’s Christian Democratic Union.

Although the two parties are part of the same governing coalition, with Bavarian state election coming up this fall, Seehofer has made a point of positioning himself to the right of Merkel on migration. In the past he has also often criticized Merkel’s more welcoming attitude toward migrants.