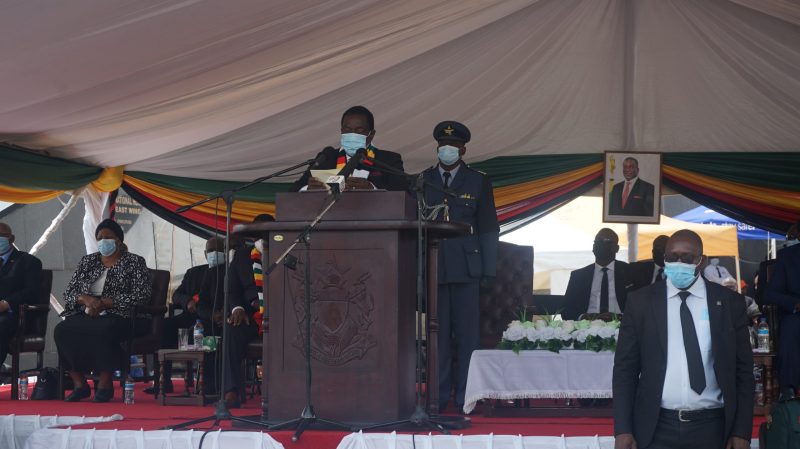 PRESIDENT Emmerson Mnangagwa has urged Zimbabweans who are yet to get vaccinated to do so now as the country has enough vaccines to reach herd immunity.

He was speaking at the National Heroes Acre in Harare where the late Zanu PF national spokesperson Simon Khaya Moyo (76) was being buried Monday.

Moyo succumbed to cancer at the Mater Dei Hospital in Bulawayo last week.

Mnangagwa called upon Zimbabweans to take advantage of the availability of the Covid-19 vaccines and get vaccinated against the virus before the Festive Season.

“As we approach the Festive Season, I call upon you, fellow countrymen and women, to continue complying with the World Health Organisation (WHO) protocols, guidelines, and procedures for containing Covid-19 containment,” he said.

“We must never let our guard down. Those who are not yet vaccinated get jungwadhi (vaccinated). There are enough vaccines in the country for us to attain herd immunity.”

The government had hoped to achieve herd immunity of 10 million people getting vaccinated, but this Sunday, only 3 671 157 citizens had been vaccinated against Covid-19.

Early this month, the government started vaccinating teenagers from 14 years.

Turning to Moyo, Mnangagwa said Moyo “distinguished himself as a loyal, patriotic servant and a bureaucrat and never used his proximity to leadership to advance or pursue narrow self-interests or a counter-revolutionary agenda.”

“His career was informed, hard honest work and his loyalty to the nation. He was a humble diplomat, a rare breed and astute man,” Mnangagwa added.

Moyo was born on October 1, 1945, and attended Fletcher High School. He briefly worked at Mpilo Hospital in Bulawayo as a research assistant from 1966 to 1967.

He left the country and joined the liberation struggle, Zambia in 1968. He later enrolled at Makerere University in Uganda for a B.A. Honours in Social Science in 1970 before proceeding to University of Zambia.

He did a military intelligence course in the Soviet Union now Russia and Cuba and attended the Lancaster House Conference in 1979.

In 1989, he became a Zanu PF Central Committee member, the first head of corporate affairs of the Development Trust of Zimbabwe (DTZ).

In 1990, he was elected the MP for Bulilima Mangwe South constituency, in 1992 he was appointed deputy minister of Industry.

In 1994, Moyo was elected deputy secretary for administration into the Zanu PF Politburo and became Transport and Energy Minister.

In 2000, he was appointed Mines, Environment and Tourism Minister. The same year, he was appointed deputy secretary for Legal Affairs. Moyo was later appointed Zimbabwe’s High Commissioner to South Africa, Lesotho, and Mauritius.

He published two books, “Mr. Speaker, Sir” and “Service to my Country”.