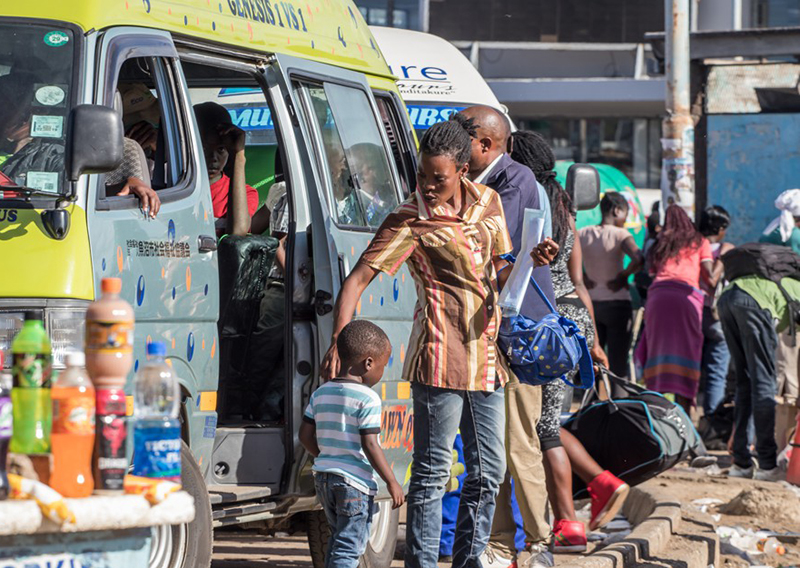 Getting around a major city with young children can be difficult nearly anywhere in the world, but in Zimbabwe’s capital city, those ordinary challenges are compounded by a tiered, informal transit network; high costs of getting around; rampant sexual and physical harassment from taxi and bus drivers alike; and the knowledge that, in the memories of most residents, Zimbabwe once had a functional, even robust, urban transit system.

As Zimbabwe celebrated its independence from British colonial rule on April 18, 1980, Julius Nyerere whispered to Robert Gabriel Mugabe, “You have inherited a jewel of Africa, don’t tarnish it.”

A well-connected and functional transportation system was one of the many elements that made Zimbabwe a jewel. And in pursuit of the promise not to tarnish that “jewel,” the Zanu PF and Mugabe government did invest in its infrastructure with a wide network of affordable trains and buses. In the years of political upheaval since, however, that system has become a mere mockery of its old self.

The whistles of the trains that ferried urban locals from one point to the other have long been silent: The public trains once operated by the national railway no longer run. Even the formal public bus system no longer exists, and the roads that once carried those buses are deteriorating and difficult to navigate. That dilapidation carries a heavy cost particularly for women, and has affected how they travel within and around the city with their children and babies—issues that are compounded by class and inequality.

One of the biggest challenges in getting around Harare is something that many people take for granted in cities around the world: shopping for groceries. The current political unrest following the coup last year overthrowing President Mugabe, who had served first as prime minister and then as president for nearly thirty years, has brought with it economic upheaval. Inflation is at a ten-year high of more than 30 percent, the costs of basic household items have skyrocketed, and imported items are also becoming incredibly expensive. As a result, even buying the bare necessities requires careful planning and a series of precise financial decisions.

Not the least of which involve transit. Below are three of our stories about the day-to-day challenges involved in simply making a weekly shopping trip.

My journey: The only route to town is paved with high cost and harassment

Like many women in Zimbabwe, I usually make the trek to the market on Saturday mornings. And like other women, my experience is often determined by my financial situation, the neighborhood I live in, and how much help I have. I live in the high-density neighborhood of Warren Park with one biological child, who is ten years old, and five other children in my care under the notion of extended family and Ubuntu which so richly defines Africanness.

All of the children like to join me for the shopping, but today I can only take Taku, age 18, and Tavonga, age 10. The rest of the kids, who are 8, 6, 4 ,and 3, are too much trouble to tag along. And I don’t want to subject them to the rampant harassment that awaits us on our journey. Without a car, not only will bringing the rest of the kids be too much of a hassle; it will be costly, too. With just the three of us, I can pay for three seats in the regular public taxi-bus popularly known as kombi.

Unlike the formal public transportation network we once had in Zimbabwe, the kombis are privately run, even though they are supposed to be regulated by the government. The combination of a privatized transport system coupled with my low wages means that  transportation is costly. Traveling with all the kids is a luxury I just cannot afford.

The youngest children are disappointed and it’s an hour and many tears before I can leave. When I do, with Taku and Tavonga in tow, it is to Harare’s Central Business District (CBD), which is notorious for its volumes of traffic and congestion, and relentless street vendors. In recent months, the area has also been the setting for massive political protests, police shootings, and mysterious building fires. In February, the police attempted to ban the kombi buses in the CBD, which led to riots, and the deaths of three civilians. Formal buses brought in to ferry kombi passengers the rest of the way into the district were stoned. In August, six were killed in riots in the CBD. In October, a parking attendant was shot and killed after a disagreement over fare.

Today, however, I’m mostly worried about the harassing kombi conductors (mahwindi) constantly yelling for passengers, and at many of the women who walk by.

The sexual harassment and petty crime is so prevalent among these mahwindi that a spokesperson for  Zimbabwe’s National Police, Charity Charamba, recently told an indaba, or summit, against gender-based violence, “The police are aware of random thefts, touting, uncouth conduct by commuter omnibus drivers that pose danger to the general public and affect women and children in particular, and we are conducting operations to curb such unruly behaviour.” Charamba pointed to examples of verbal harassment including sexually explicit remarks yelled at women and children, and physical harassment that included assault. Nonetheless, many women complain that the police aren’t doing enough to curb the behavior of these drivers, or to protect women as they go about doing normal tasks like grocery shopping.

And it’s not just formally employed kombi drivers who harass. Men and boys known as “touts” solicit passersby for rides, sometimes without the permission of the kombi drivers. These “touts” have become popularly known for hostile and obscene behaviour that makes it a scourge to travel with kids.

Despite its many difficulties, the CBD is still the place to get the best value for my money, given my mediocre earnings as a teacher. Many financial decisions later, the kids and I use the kombi to transport the groceries home. I’m glad they’re with me. The kombi stop is down a long, dusty, potholed road, and they’re able to help carry the heavy groceries.

Muchaneta: The only way to go is walk

Muchaneta, another mother who lives in the one of Harare’s oldest high-density surburbs, Highfields, must also do her shopping on Saturday mornings. Age 32, she is a street vendor who sells her vegetable wares right in the middle of the CBD in Harare. With all of the recent unrest within the CBD, police have cleared many of the vendors from the area. As a result, Muchaneta’s stall has been moved to an isolated area, and business has been very slow. In the past week, she only got 15 percent of her usual weekly takings.

She would prefer to wait a bit longer before going shopping, but supplies in the house are getting low and she needs to replenish them. She lives on the edges of Harare, but cannot buy from the local tucks shops closer to home because their prices will be double the prices she can get in town.

With the task at hand in mind and a dollar in her pocket, Muchaneta decides to wake up early and walk slowly to town with her child, Given, age 3, on her back. She would catch a kombi on her way back when done with her shopping, but she has only enough money to take transportation one way. As she walks a shortcut along the old railway line, Muchaneta wishes that the affordable train her parents told her once functioned still worked.

“Being able to move from one point to the other is not a matter of choice. It is a matter of survival for me and my family. I have no alternative but to brave the streets with my baby on my back, as congested as they are and as expensive as the transport options are,” Muchaneta said. “The pains of womanhood and motherhood in the city!”

Sharon: The difference a car makes

On the other side of Harare, Sharon’s experience in the low-density and leafy Mount Pleasant neighborhood is a bit different. Like the two of us, Sharon also works a full-time, often hectic job during the week, and would have preferred to sleep in on the weekend, but she also needs to do the grocery shopping for her family: her husband and three children, Ropa, 9, Tatenda, 6, and Vongai, 4.

Because they want to accompany her to the market, Sharon happily scoots all the tiny feet into the family truck, ready to spend an expensive afternoon full of ice cream, candy, and groceries at the posh Borrowdale Village Walk shopping mall. There is no way she would do her shopping in CBD given the volumes of traffic and the subsequent congestion. The roads at the Village Walk are in pristine condition and the ambiance at the shopping mall is family-friendly. Two hours of shopping and two hours of lunch with the kids later, Sharon returns home and satisfactorily throws herself in front of the television. It was a productive afternoon.

Though Sharon seems to be the better placed of the three women, she, too, has to deal with the high cost of transportation. For her, it’s fuel and parking. While inflation is fluctuating wildly due to the current economic crisis, and prices are changing rapidly, generally speaking, gasoline can cost about ZWD $1,700 per gallon. As this article was being published, the current exchange rate was ZWD $100 equalled approximately USD $0.27, equivalent to $2 to $8 U.S. dollars per gallon. A kombi isn’t really a viable for option for Sharon; not many kombis operate in neighborhoods like hers.

For all women in Zimbabwe, the collapse of  an organized transportation system has meant that child-friendly facilities are but a dream. Mothers do travel around cities, but it is no small feat.

Advances in technology and their integration in the transportation sector bring some rays of hope. Zimbabwe has recently seen the launch of Hwindi, a smartphone application that matches passengers and drivers. It has a loose resemblance to Uber or Lyft, although Hwindi is an app for taxi, ridesharing, package deliveries, and tow trucks all in one. All drivers are required to have a background check and clear a police report check before they can be drivers. It’s a welcome improvement to kombis because of the safety focus, but it is more expensive, and can be closer to the price of a taxi ride than a bus ticket. Time will tell whether these new innovations adequately take mother and child safety into consideration.

Another silver lining in this story: The spirit of Ubuntu and community is still deeply entrenched in the Zimbabwean way of life. Every so often, you will see a woman, and even men, offering to help carry the groceries or the babies just to make life as a mother that much easier.

Maureen Sigauke is the executive director of a community-based organization in Zimbabwe, Green Active Citizens, an Atlantic Fellow for Social and Economic Inequality, and a mother to six kids in Harare, Zimbabwe.