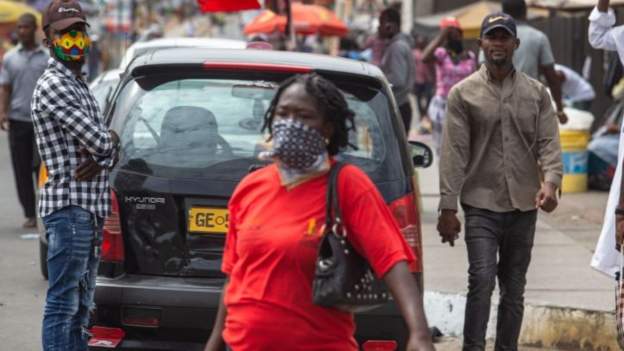 Ghana’s President Nana Akufo-Addo has extended the ban on public gatherings until the end of the month as the country’s coronavirus cases continue to rise.

Schools will remain closed while religious activities, conferences and festivals are banned during the period. All border crossings will also remain closed.

The west African nation has so far confirmed 4,700 cases and 22 deaths.

In a televised address on Sunday night, President Akufo-Addo said extending the measures was necessary to contain the spread of the virus.

The restrictive measures were first imposed two months ago to curb the spread of the virus.

On Thursday, more than 500 workers at a fish processing plant tested positive for the virus in the industrial city of Tema, which saw the country’s total case count increase by nearly 30% – the highest in a single day.

This was days after health officials said infection rates had reached a peak.

The spike in cases has also been attributed to the clearing of a backlog of samples in laboratories. Ghana has tested around 160,000 samples so far.