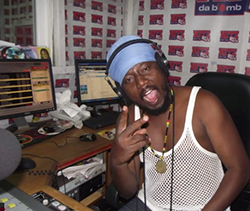 POPULAR Ghanaian reggae singer “Blakk Rasta” has been summoned to appear before a parliamentary committee after he said that most of the West African country’s legislators use marijuana, officials said on Friday.
Speaker Doe Adzaho has issued an order for the musician, whose real name is Abubakar Ahmed, to answer to lawmakers for damaging the reputation of parliament.
The comments, made on radio station HitzFM, angered many lawmakers and Ahmed could be prosecuted or be made to withdraw the comments and publicly apologise, a senior clerk told Reuters.
The 40-year-old musician, famous in Ghana for a song eulogising Barack Obama that earned him a rare dinner meeting with the U.S. president when he visited Accra in 2009, said he was misunderstood.
“What I said was that about 80 percent of parliamentarians all over the world may have used marijuana,” he told Reuters.
He said the comment was part of his fight to legalise the drug.
Barack Obama Remix by BlakkRasta