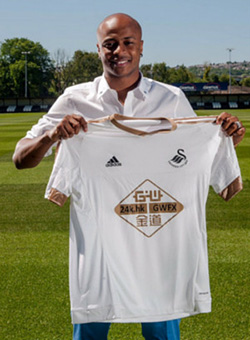 GHANA forward Andre Ayew has joined Swansea City on a free transfer and signed a four-year contract, the Premier League club said on Wednesday.
The 25-year-old has joined from French club Olympique Marseille, where his contract expired at the end of last season, having scored 10 league goals in his final campaign.
Ayew, who has 62 caps for Ghana, has played in four African Nations Cups and two World Cups.
“The project that the club has for the future is very exciting, and when I spoke to the chairman and manager I felt this was the right place for me,” Ayew said on the club website.
“I felt that my desire to play in the Premier League and wanting to grow as a player meant that Swansea was the best solution for me in every way.
“Seeing the honesty and desire of the club made me feel that they really wanted me to come. They have proved that in all ways.”
Ayew made 181 appearances for Marseille, scoring 52 goals and winning two French League Cups as well as playing in the Champions League.
“It was a very difficult decision to leave Marseille. I spent so many years there – I was in the youth team before breaking into the first team and stayed all of my life in Marseille,” he said.
“It’s true that I had a lot of offers, so I needed to take my time to make the right decision for my future. I didn’t want to rush but I feel I have made the right decision.
“Football is all about growing up and becoming a better player and a better person.”Advertisement