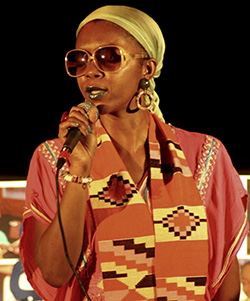 GHANAIAN Malagasy Spoken-word Artiste Crystal Tettey is set to perform at Bulawayo’s Intwasa Arts Festival, one of Zimbabwe’s premier arts gatherings as well as Harare’s Shoko Festival in September.
Intwasa begins on September 26 while the Shoko Festival will start a day later on September 27.
Starting off as a community initiative, the multi-discipline Intwasa arts festival has grown to become a leading festival celebrating human diversity and creativity.
Over the years, Intwasa has hosted regional and international artistes from Botswana, Swaziland, South Africa, United States of America, UK, Sierra Leone, Ghana, Kenya, Malawi, Wales and Zambia.
The heart of the festival remains community development and collaborations whilst its vision is mass celebration of human creativity.
Meanwhile, Shoko Festival is Zimbabwe’s fastest growing international festival. Shoko is a living experiment in urban culture, free expression and positive social change.
Shoko is about breaking down the barriers between media, culture and activism to create a dialogue, progress and cutting edge urban culture.
Crystal’s journey as a spoken word artist started in 2004, when she participated at an event in Ghana dubbed “The Poetry Slam Jam’. She hasn’t looked back since then.
She has previously performed in Malawi and South Africa.
In July 2013, she released her debut album, ‘Faith, MadaGhana’ which was received warmly by the poetry community.
In an earlier interview with SpyGhana on the uniqueness of her art, she said “I speak a lot on peace building issues as I have direct working experiences with civil society organizations, specifically those working in women and peace building.
Crystal works with the West African Network for Peace building (WANEP), African Women’s Development Fund (AWDF) and the Foundation for Contemporary Art- Ghana (FCA- Ghana).Advertisement