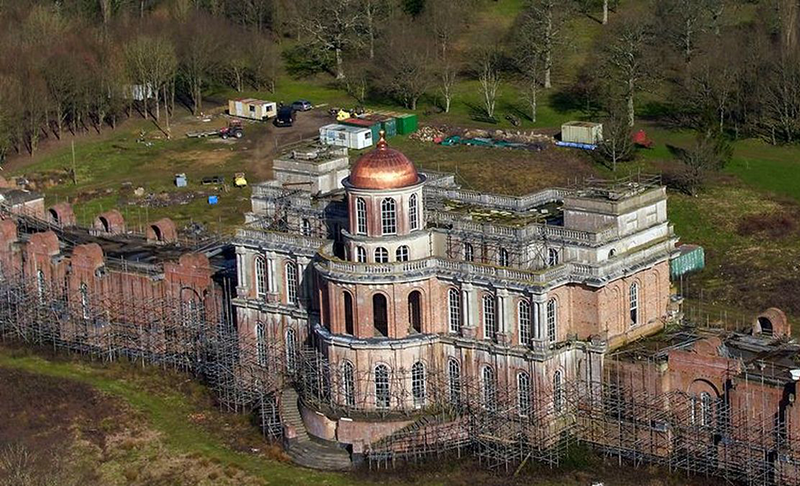 Sitting in a muddy field, unloved and deteriorating by the day sits a forgotten but hugely impressive mansion that is one of the UK’s greatest unfinished architectural projects. Bigger than Buckingham Palace, the enormous Hamilton Palace near Uckfield in East Sussex would have been a truly magnificent building if only it were finished.

Once said to be the most expensive private house built in Britain for a century, the mega home, reported to have cost £40million, was built by property developer Nicholas van Hoogstraten as a stately home and mausoleum. The businessman begun construction around 1985 but it was never finished after he reportedly fell out with the architect.

While it’s largely believed to have stalled, van Hoogstraten is understood to insist it is still very much a work in progress, at least according to comments made in 2016. He’s understood to have emigrated to Zimbabwe around a decade ago but Hamilton Palace is intended as his final resting place.

It has been dubbed the ‘Ghost House of Sussex’, reports Sussex Live due to its eerie state of abandonment. But despite its scale, there is little to hint at its presence as you approach. It is hidden away off of an unassuming junction on the A22 south of Uckfield and the house is completely obscured by a thick wooded area. 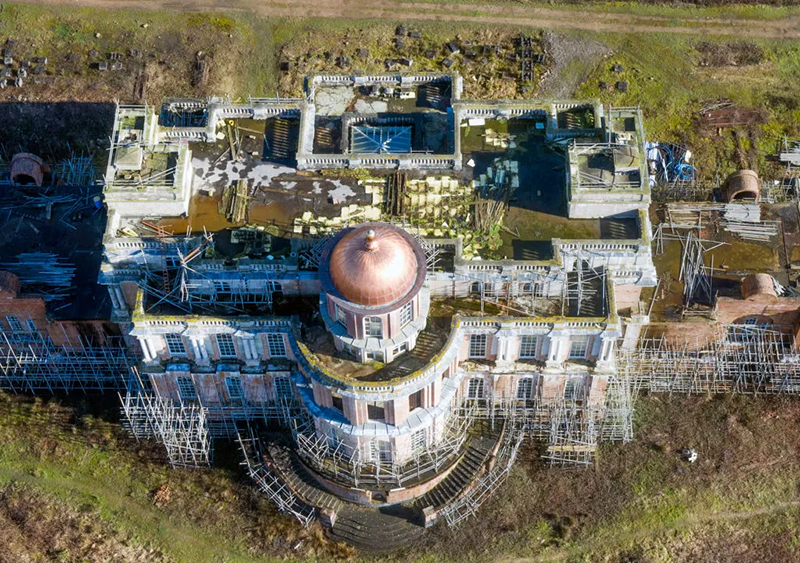 The closest glimpse you can get on foot is of a gated entrance onto the estate that gives nothing away, aside from a bricked unit and a large, white container. But there is a definite sense of unease. Stuck on the gate is a sign ‘High Cross Estate, private property, keep out’ written in capital letters.

If that’s not enough, multiple other signs warn of “shooting in progress”, “dogs running free” and CCTV being in operation. It is a clear message: do not try and come in.

It appears not many have, with most recent photographs taken by drones and older photographs taken on site apparently when work was still ongoing. Those photos show an an eerie building, shrouded in scaffolding and overgrowing foliage, with discarded containers, construction equipment and other items littered throughout the grounds. It doesn’t look like anything has happened there for a long time.

Few have been inside, but one reporter who did, in 2000, when it was said to be two years off completion, described a grand central staircase and reception hall, with lift shafts already installed and expensive stone balustrades and pillars. Low-level lighting had been installed on the roof, where there was to be a garden, and there was space for a fountain below. One entire floor was due to house van Hoogstraten’s art collection.

Over the past couple of decades, he has been involved in widely reported disputes with neighbours over the huge estate. Locals have previously vented about the large area being left unused and there was a row over a public footpath that ran through it that van Hoogstraten did not want to be used.

In answer to those complaints, in 2016 he is quoted as saying “even the most moronic of peasants would be able to see… that we have been busy landscaping the grounds of the palace so as to prepare for scheduled works”.

And he has also denied that the house is falling apart, saying: “Hamilton Palace is far from ‘crumbling’ and was built to last for at least 2,000 years. The scaffolding only remains as a part of ongoing routine maintenance such a property would require until completion.” It is thought the estate is now owned by his children through the company Messina Investments.