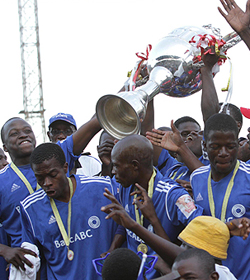 PREMIERSHIP giants Dynamos and Highlanders face early season fines from the Premier Soccer League (PSL) after they were caught in two separate incidents of indiscipline during their opening matches of the season this past weekend.
On Saturday, Highlanders manager and former Warriors midfielder Willard Khumalo was expelled from Ascot Stadium after the Bulawayo team had apparently been denied a penalty against Chapungu.
Khumalo is alleged to have verbally abused the match official and this attracts a fine of $125, as per Standing Rules and Regulations of the PSL.
On Sunday, a Dynamos fan stoned How Mine’s young goalkeeper Donovan Bernard at half time when the scores were still 0-0 at Barbourfields and now the Harare giants face a staggering $2,000 fine for missile throwing.
Bernard suffered a cut below the left eye and played the second half of the match with a bandage.
Referee Philani Ncube had just blown for half time and as the young goal minder was busy collecting his towels and water bottles, missiles rained on him with one hitting him just below his left eye.
Standing Orders mean the cases do not go before a Disciplinary Committee, but are judged using the referee’s report.
However, if a club feels aggrieved, it is free to appeal the sentence upon payment of an appeal fee.
According to the PSL’s revised Standing Order for 2014, Chapter 14, a coach, manager or member of the technical team expelled from the technical area before or during a match will be fined $125.