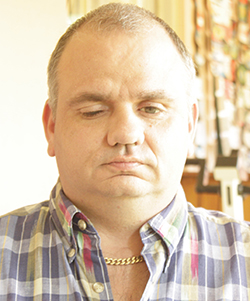 TWO things made a solid first impression when Dean Du Plessis hit the airwaves for the first time one Saturday afternoon, almost a decade and a half ago – a strong, authoritative voice booming out over a deep, encyclopedic knowledge of cricket.
The natural-sounding broadcasting voice that communicates directly with you would create a sense of even deeper amazement and awe when Steve Vickers, the host of Radio 1’s weekly sports show, Saturday Sports World, announced that his debuting cricket analyst was, in fact, born blind.
Announcing his arrival at a time the old guard of Zimbabwean cricket broadcasting was slowly leaving the scene – Austin Wilmot, Des Evans, Willie Blumeris, Brian Murphy – Du Plessis had lofty standards to match. Admirably, he would emerge as a breath of fresh air and youthful exuberance.
‘Object of wonder’ is perhaps the best way to describe Du Plessis’ global image, and countless articles have been penned in different countries about how a blind Zimbabwean cricket journalist-cum-commentator is able to defy visual impairment to be the “world’s only blind commentator.”
But there is another side to Du Plessis, a side he has often found hard to display, especially when the foreign press corps is in town and his handicap, and how he manages to conquer it, is the juicer story editors back home are looking for.
That side, which is just being a cricket journalist, and talking cricket, is what Du Plessis is only happy to do as we sit down to record remarkable cricketing recollections spanning over 22 years, and a storied media career.
Du Plessis can be singled out today among those who have been around the longest time, at least since the attainment of Test status in 1992, to witness the ups and downs of Zimbabwean cricket – from a team that, on its day, could give any of the leading international sides bloody noses, a country that in 2001 had the world’s premier Test batsman in Andy Flower, to a team that now loses series to minnows Afghanistan in quick succession.
After cutting his journalism teeth in broadcasting, Du Plessis would also venture into print with the Daily News and The Herald around 2010 as a regular contributor and columnist.
Ever the perfectionist, Du Plessis is the first to fault his own early newspaper work and, ever the cricket man, he equates his development as a writer of note to how a batsman grows his repertoire of cricket strokes.Advertisement

“Some of the stuff I wrote at first was very, very bad,” says Du Plessis.
“Obviously you sort of, you know, grow in confidence. Your expansion of shots develops and you start to then drive through the covers or pull over midwicket as opposed to just run the ball down to third man.
“Andy Flower was one of the most boring cricketers you’d ever see because he would run the ball to third man, run the ball to third man, and then, occasionally, maybe, he would, you know, gently push one down the ground and so on and so forth. And then, when his confidence grew, he started to expand and then the next thing we saw him playing aggressive cut shots and occasional pull shots, cover drives, reverse-sweeps and sweeps.”
The Great Andy Flower