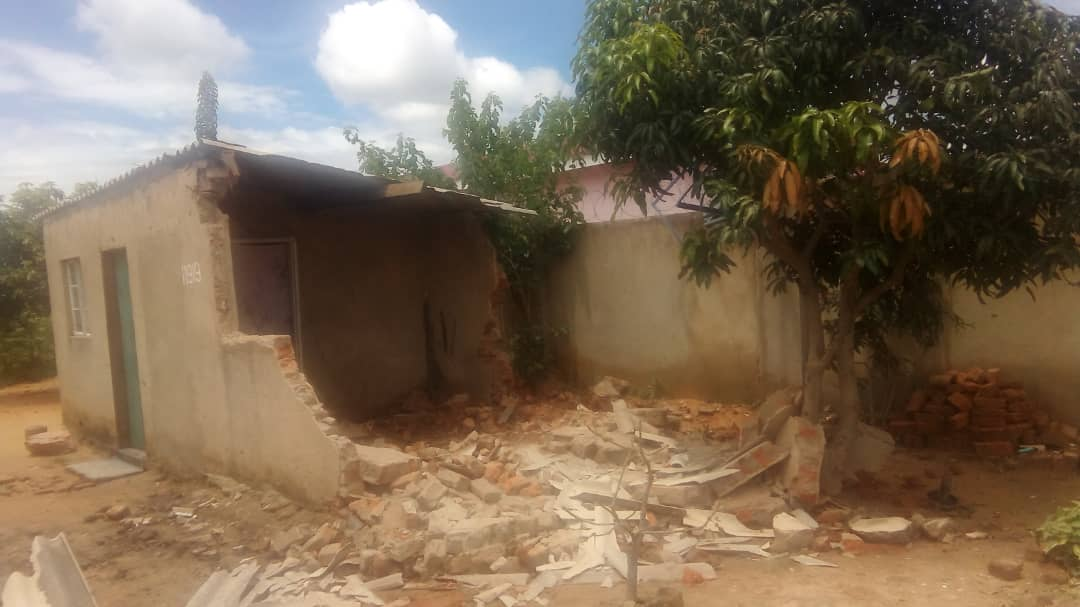 A SOMBRE atmosphere engulfed Rujeko suburb in Chinhoyi when Tendai Matumba (5) was early Friday crushed to death after a neighbour’s 5 000-litre water tank fell onto a cottage in which the minor and her family members were sleeping in.

Tendai’s sibling identified as Tatenda (9), her father Peter Matumba and mother were seriously injured and rushed to Chinhoyi Hospital where they are admitted.

The water tank overlooked the two-roomed cottage and they were separated by a precast wall a few meters apart.

Narrating the tragedy to NewZimbabwe.com at the scene of the accident, an eyewitness Sibisisiwe Nyamachewa said Rujeko suburb residents were awakened by a loud bang around 4 am, prompting them to come out and investigate only to be met with screams for help from the occupants trapped under the debris.

“It happened around 4 am. When I got outside to investigate the loud noise, I realised our neighbour’s water tank had collapsed from its mounted pedestal and damaged the cottage,” she said.

“Fellow neighbours came to rescue. I managed to retrieve Tatenda while the now deceased was lying motionless. The parents and surviving child were badly injured,” added Nyamachewa whose parents own the damaged cottage.

Another witness Colleta Dhihori said when she got to the scene, rescuers were rummaging through the damaged structure to rescue the family members.

Dhihori said she picked Tendai and wrapped her with a blanket but noticed she had died in her arms moments later due to the severity of head injuries sustained.

“Tendai’s head was flattened by the weight of the loaded water tank while her father, mother and elder sister sustained several bodily injuries. It was a horrific scene.”

Simbarashe Madhishi, son to the tank’s owner, said the water tank was hoisted in May last year and had not showed any signs it was weighing heavily on its angle-iron fabricated stand.

By the time the NewZimbabwe.com news crew got to the scene, the water tank had been removed while Tendai’s body had been conveyed to the Chinhoyi Hospital mortuary.

Concerned residents said there was an urgent need for council, or any other relevant arm, to regulate the installation of water tanks particularly in congested high density suburbs.