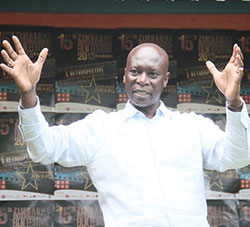 THE Zimbabwe International Film Festival (ZIFF)  will, this year, feature some of the leading film industry experts from all over the world, organisers have announced.
The film festival now in its 16th edition, will run from 4 to 11 October with screening venues will be spread around the City of Harare.
An interesting feature of this year’s Festival will be the lively Outreach2Educate program that will take world-class films to audiences in High Density suburbs in Harare and Bulawayo.
The Festival will also touch Bulawayo, Mutare, Masvingo, Norton, and Chitungwiza.
Themed ‘Universal African’, the 16th Edition of ZIFF is a celebration of African cinema and world-class African filmmaking.
“This theme gives us the opportunity to engage the diversity of African film stakeholders globally, and motivate them to convene in Zimbabwe,” said Nigel Munyati, Ziff Founder and Executive Director.
“ZIFF 2014 will screen a broad spectrum of international films (documentary, action, short films and animation); with particular focus those that represent the continent positively through film.
“Our opening film will be Camarada Presidente, a documentary on the late President Samora Machel. The Closing Film will be Finding Fela, a documentary on the late Fela Ransome Kuti.”
The popular Short Film Programme (SFP), which mentors aspiring writers, actors, and directors in producing short films, will run concurrently with the festival.
“Outreach to Educate (o2e), that will screen films in the High Density Suburbs in Harare and Bulawayo, in fulfilment of our commitment to creating opportunities for young filmmakers in marginalised areas; and Film Forum (FF) that will offer filmmaking master classes and industry workshops that include: Electronic Film Distribution, Co-Production,  Film Funding,  Documentary Film Making, Mini Input TV, Pitching Workshop and The Case for a Film Commission in Zimbabwe, ” said Munyati.
“ZIFFT has invited various international film industry experts such as Buni.tv (Kenya), Mokolo Foundation (South Africa/Nigeria), National Film & Video Foundation and KwaZulu Natal Film Commission (South Africa), and DOK.fest München (Germany).”
Zimbabwe’s premier musicians, Oliver Mtukudzi and Mokoomba will provide entertainment during the festival and their presence will be a crowd puller. Advertisement

“This will undoubtedly raise significant local and regional interest that will guarantee huge audiences. Last year, approximately 2,000 people visited the Festival during the rainy season; and we are confident that attendance this year will rise to at least 500 visitors per day (film enthusiasts, local and international filmmakers),” said Munyati.
As in 2013, ZIFFT will collaborate with Goethe Institut to host Mini INPUT that will bring a diverse range of films for screening during the Festival. This year ZIFFT will secure the full participation of ZBC and other prospective TV stations, to ensure that they appreciate the broad range of content they can bring to their television channels.
ZIFFT and Goethe Institut will once again bring the filmmakers as part of ZIFFT’s Short Film Programme. The filmmakers will mentor selected local emerging filmmakers in scriptwriting, directing and editing.
The completed films will be shown at the Festival, on Culture Night. They will also conduct filmmaking workshops and be resource persons during the Film Forum and outreach activities.