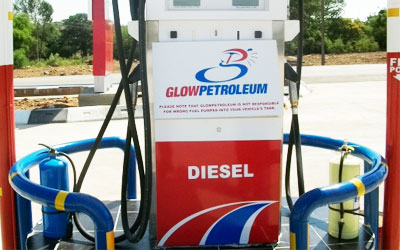 VICTORIA FALLS: One of the country’s leading fuel dealers, Glow Petroleum has opened a new fuel station in this resort city after investing US$1,5 million into the project.

Glow owner Aaron Chinhara partnered with Victoria Falls businessman Ozias Marange on the project, which will also see a mall being built to the tune of more than US$3 million.

While the opening of a fuel station might seem to be an ordinary development, the new facility exudes unparalleled quality.

It started with a competitive price of US$1.30 for a litre of petrol, US$0.7 cheaper than other dealers in city.

Just across the road from the site of the garage, are two fuel black market spots that have been booming for more than a year.

”We decided to come to this side of the country to join hands with those in the southern region and give each other energy in this business,” Chinhara said.

“This is the first phase and US$1,5 million was put. When the whole project is complete, it will be plus US$3 million and we want to put a one-stop- modern mall here for the people of Mkhosana and Chinotimba suburbs.”

He said as a company, Glow Petroleum valued quality.

Chinhara added the company would construct more fuel stations across the country.

“Glow petroleum is a 100% black-owned company and we have done numerous projects, and today (Wednesday), we have opened branch number 42 as part of our expansion policy.

“We always want to make sure that when we build the next garage, we always try to do better and make sure it is better than our previous one.

“We want to make our communities and country beautiful by creating beautiful facilities. If on any day Victoria Falls had no fuel, that time is over.”

Marange, who also runs a haulage trucking and hardware business, concurred, adding the joint venture would ensure the Victoria Falls community, especially the tourism industry does not run out of fuel.

“We want to make sure every business operates without the challenges of fuel. This will help the local industry as there will be no shortage of fuel,” Marange said.

The fuel station will operate 24 hours and it opened to motorists Wednesday.