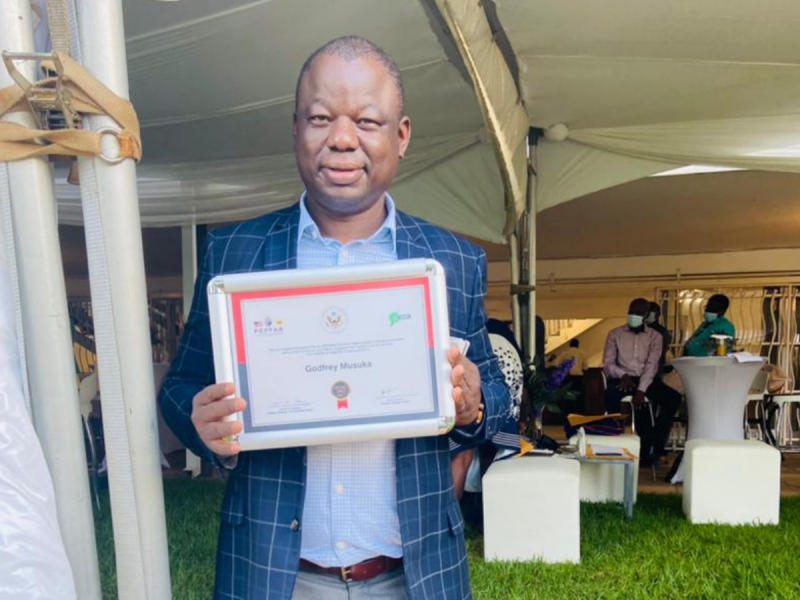 THE U.S. President’s Emergency Plan for AIDS Relief (PEPFAR) has honoured ICAP in Zimbabwe’s country director, Godfrey Musuka, DVM, MSc (Med), MPhil, Ph.D., as one of 12 individuals who have made a significant impact in the response to HIV and helped steer Zimbabwe on the path towards epidemic control.

Musuka and fellow PEPFAR heroes were honored at a ceremony on November 29, 2021, held by the US Embassy in Zimbabwe in honor of World AIDS Day.

PEPFAR partnered with the Zimbabwe National Network for People Living with HIV (ZNNP+) in a nationwide call to Zimbabweans to nominate community members for the PEPFAR Heroes award.

The award celebrates heroes who have gone above and beyond the call of duty to create an enabling environment for people living with HIV to access health-related services. Thomas Hastings, the Chargé d’Affaires of the US Embassy in Harare, commended Musuka, sharing “Godfrey is a hero who has dedicated his career to shedding light on the epidemic through data.”

A public health and data expert with over 25 years of experience implementing health interventions, Musuka has led ICAP in Zimbabwe for seven years as the country director. In that time, he shepherded the first and second the Zimbabwe Population-based HIV Impact Assessment (ZIMPHA) surveys, which revealed the country is on track to achieve HIV epidemic control by 2030.

Recognized for his leadership in conducting the surveys, Masuka was selected out of more than 100 notable people nominated for the award.

Twenty semi-finalists were carefully chosen by a five-member committee with representatives from the private sector, civil society, UNAIDS, and the media. The 12 finalists were selected through public voting and endorsements from community members.

For Musuka, being a PEPFAR Hero is a significant achievement. “I am proud to have assisted my country in addressing a critical public health crisis.”

However, he believes more work remains to meet the 2030 goals. “The key area where the HIV response in Zimbabwe remains weak is addressing the 95-95-95 [UNAIDS goals] among key populations, especially targeting men who have sex with men due to the criminalization of their activities,” Musuka said.

“We need to make it easier for key populations to access HIV testing, treatment, and care services.”

A major global health organisation that has been improving public health in countries around the world for nearly two decades, ICAP works to transform the health of populations through innovation, science, and global collaboration. Based at Columbia Mailman School of Public Health, ICAP has projects in more than 30 countries, working side-by-side with ministries of health and local governmental, non-governmental, academic, and community partners to confront some of the world’s greatest health challenges.