UNTIL recently Priscilla Magaya was an administrator in a printing firm in Zimbabwe’s sunny capital Harare. Today she spends her days on the side of a street, clutching a thick bundle of different banknotes. A few weeks ago, after two years of not paying her wages, her employer went bust. Ms Magaya turned to money trading, swapping real American dollars for Zimbabwe’s confusing profusion of local paper.

For $100 in actual greenbacks, buyers get $120 in bright green “bond notes”—a Zimbabwean currency introduced in 2016 that is meant to be pegged to the dollar—or $140 in mobile money, which is also meant to be on a par with real dollars. Her earnings are “not something that I can survive on”, she says, but she has no other option.

Two years ago money in Zimbabwe was simple: everyone used the American dollar, introduced in 2009 after hyperinflation destroyed the Zimbabwean version. Since then, however, banks have run out of real dollars because the cash-strapped and unscrupulous government grabs them in exchange for all-but-worthless IOUs.

Zimbabwe is becoming the world’s first cashless economy, but not in a good way. ATMs are empty. Banks allow customers to withdraw just $20 a day, not in real dollars but in local bond notes. Long queues form each morning. Most people rely on electronic bank transfers or mobile money to pay their bills, usually at a hefty premium.

All this loopiness was originally the fault of Zimbabwe’s former president, Robert Mugabe, who was ousted in a coup last year after 37 years in power. Can his successor, Emmerson Mnangagwa, restore sanity? It will not be easy. The fiscal deficit was a daunting 11% of GDP in 2017. Unpaid doctors and teachers are striking. Businesses are folding like useless banknotes. Elections are due by August. The ruling party is itching to splurge cash on pre-ballot handouts and, perhaps, voter intimidation. 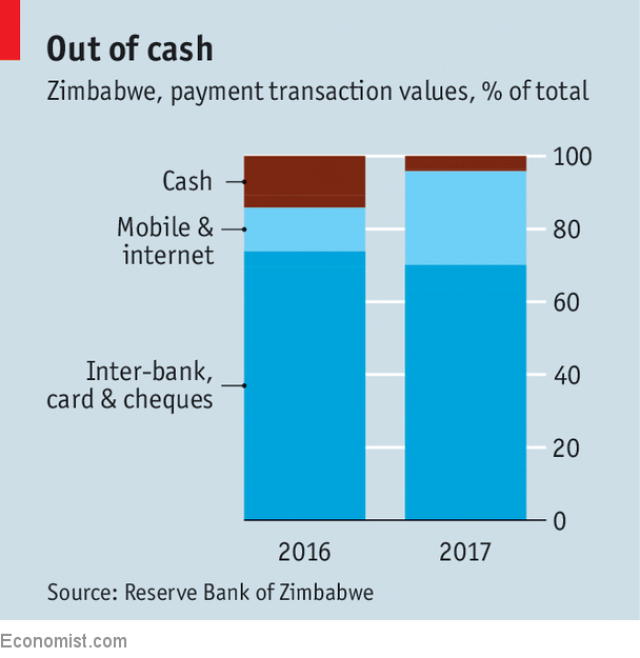 Mnangagwa has spent the past few months jetting around the world, usually wearing a Zimbabwean-flag scarf over his suit, trying to raise money. So often does he say “Zimbabwe is open for business” that it has become a meme. Though he claims to have secured some $11bn of promises of foreign direct investment, many doubt that it will amount to much. Since the coup “things have actually got worse,” says Tendai Biti, an opposition activist and former finance minister who served in the government of national unity after disputed elections in 2009. Prices have gone up as real dollars have become even more scarce.

Zimbabwe used to rely on farming (especially tobacco) for foreign exchange. Mugabe wrecked the country’s largest export industry by grabbing land from white farmers and handing it to cronies who often knew little about farming. As agricultural output collapsed and jobs disappeared, the economy nosedived. Monthly inflation hit 80,000,000,000%, by one estimate. Worthless $100trn notes from that time are now used as bookmarks.

Since 2009 the economy has recovered somewhat. Farming has grown again, partly thanks to the leasing of farms back to their previous owners, and partly thanks to the replacement of the old currency by the dollar. But Zimbabwe still cannot feed itself. Despite bumper rains, more than 1m people may not have had enough to eat earlier this year, according to USAID, America’s aid agency. And the cash crunch hits rural areas particularly hard. “I am getting nothing out of farming,” says a 43-year-old tobacco farmer who gives his name as Cloud. He must travel almost 50km from his home to buy anything with the electronic money in which he is paid.

Mnangagwa’s best hope is that after he wins the elections he can persuade international lenders, such as the IMF, to renew Zimbabwe’s lines of credit, which were cut under Mugabe. Foreign investors could also bring in more hard currency: Zimbabwe has plenty of gold and platinum, much of which isn’t being exploited.

But much more will have to change before Zimbabwe can really be called open for business. Under Mugabe, legions of ruling-party loyalists were hired as civil servants and endless irksome rules were written so they could demand bribes not to enforce them. As formal businesses have shut or gone underground, tax collection has plummeted. Zimbabweans have moved from offices and factories into informal jobs such as hustling. Roads have crumbled and many of the best-educated workers have emigrated.

Magaya tentatively predicts that things will get better. But she worries that “it will take as long to fix the country as it took to destroy it.” In the meantime, she is hoping perhaps to move to South Africa.