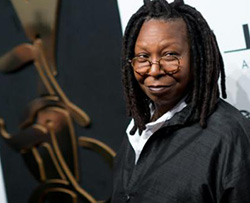 ONE of Bill Cosby’s last public supporters abandoned him Tuesday when Oscar-winning actress Whoopi Goldberg said she no longer believed he was innocent until proven guilty of alleged sexual assault.
Goldberg spoke out a week after a federal judge made public an admission from Cosby, given behind closed doors, that he used sedatives to lure at least one woman into having sex.
Speaking on ABC chat show “The View”, Goldberg said she no longer believed the disgraced comic was “innocent until proven guilty” of allegedly drugging and assaulting dozens of women.
“If this is to be tried in the court of public opinion, I gotta say, all of the information that’s out there, kinda points to guilt,” said Goldberg, a co-host of the show.
She made the remarks in conversation with ABC legal analyst Dan Abrams, who told Goldberg that Cosby was unlikely to face prosecution due to the statute of limitations.
“I can’t say any more innocent until proven guilty, can’t say that anymore because there’s no way to prove it,” said Goldberg.
“You have a serial rapist, he’s been on the streets for 30 years. I have to say, I thought that ‘yea, here’s all the information, take his ass to jail.'”
The 77-year-old Cosby, the former megastar who played a family doctor in hit sitcom “The Cosby Show,” has turned into a pariah over allegations of sexual misconduct spanning four decades from 50 women.
In a deposition in 2005, Cosby admitted having obtained seven prescriptions for Quaaludes and giving them to other people.
But he avoided questions about who he gave drugs to and when, and whether he gave women drugs without their knowledge.Advertisement