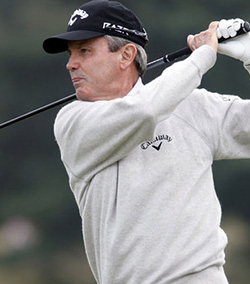 RAISED on a farm in the Centenary area of Zimbabwe, Mark McNulty was “pretty much brought up with a weapon in my hands.”
As a kid, he admits to taking aim at virtually “anything that moved; Guinea fowl, Impalas.
“Now,” says the 60-year-old, eight-time Champions Tour winner, “I do a different kind of shooting.
“A better kind of shooting.”
Using a camera, not a gun.
McNulty is at work in Canada, hitting balls on the Canyon Meadows practice range as dark, angry clouds begin to gather on the second day of pro-ams in advance of the Shaw Charity Classic.
“I got into the photography about 20 years ago,” he says of his off-the-fairways passion.
“You get older and your perspective changes. You understand better how the numbers of these animals have been seriously depleted, whether it be leopards or lions or elephants.
“So my love for shooting was quickly replaced when I realized at what was happening. But I do love the bush.”
So photography took its place.
“Patiently waiting for an animal to do something extraordinary in the bush and getting the shot you want is something that’s hard to describe.”
Of the African Big Give — lion, elephant, buffalo, leopard and rhino — one stands out as a special subject for McNulty’s long lens.
“Oh, leopards,” says McNulty, who holds dual — Zimbabwean/Irish — citizenship.
“For sure. They’re such a beautiful, beautiful animal. So amazing to watch. It’s really one thing watching a lion on a kill, quite another thing watching a leopard on the hunt. Leopards have such . . . guile. It’s just fantastic.
“When they do make a kill and take it up a tree, the sheer strength involved is really quite incredible.”
In over two decades of capturing images, McNulty doesn’t have a single particular photo he’s most attached to or proudest of. But a pal of his, a park ranger, managed to snap one off that inspires a certain amount of envy.
“He took this shot of a couple of lions fighting. On their hind legs, literally paw-to-paw, two males. The power involved, to get it at just that moment . . . amazing photo.
“That’s a shot I’d have loved to have taken.”
On land, at any rate. In the water is another matter entirely. McNulty also follows his interest in nature photography down into the depths.Advertisement

“My other great passion is sharks and their predicament in the wild,” he said.
“A lot of people don’t understand that we, people, are killing 70 million sharks a year. So sometime or other, it’s going to break the camel’s back.
“It takes quite a while for a shark’s pup to become an adult and they’re being taken out of the water before then by long lines and stuff like that.
“I love to photograph them. You don’t need to be in a cage to photograph a shark. The thing about sharks is that if they surface you’re in trouble. Then they think you’re a seal or a penguin.
“But when you’re down there with them, you’re safe. Well, relatively safe.”
This article was originally published by the Calgary Herald.