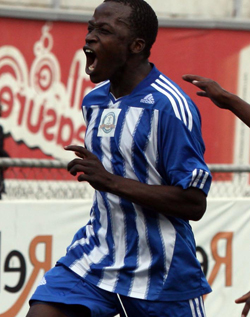 WARRIORS coach Ian Gorowa has included Devon Chafa in his squad to face Mozambique in a dead rubber 2014 World Cup match on Sunday next week, despite the player facing a ban from Fifa over the use of an illegal substance.
Chafa’s case has not been concluded, but Zifa seems to have been given the player the benefit of the doubt, at least for now, after his family doctor indicated that the medication is part of treatment he is receiving for an undisclosed ailment.
Chafa is also expected to feature for his club Dynamos this Sunday when they face Shabanie Mine in the semi-finals of the BancABC Sup8r Cup at Barbourfields Stadium in Bulawayo. The midfielder has received support from his club.
Fifa has refused to comment on the issue saying: “As a general rule FIFA is not in a position to comment or even confirm or deny the existence of a positive doping case. Should a player return a positive test it would be handled according to the FIFA Anti-doping regulations and the FIFA Disciplinary Code, including the public disclosure of a potential sanction in due course.”
For the Mozambique match, Monomotapa midfielder Obey Mwerahari is the only new face from the team that eliminated Zambia in an African Nations Championship (CHAN) qualifier a fortnight ago.
Harare City’s Silas Songani makes a return after being excluded from the CHAN final squad while Kaizer Chiefs holding midfielder Willard Katsande will be the only foreigner in the side, finally making a return after being snubbed by former coach Klaus Pagels.
The midfielder last made an appearance for the Warriors against Guinea in June 2012 when he was red carded for head butting an opponent.
The Warriors go into camp on Sunday with full training starting the following day.