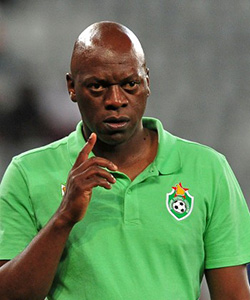 ZIMBABWE coach Ian Gorowa has credited Libya’s resistance and ability to frustrate his Warriors which saw Javier Clemente’s side reach the Chan final via a penalty shoot-out.
Gorowa’s side were by far the better side on the evening in Bloemfontein, but failed to produce anything from their chances across the 120 minutes of goalless semi-final action.
“Congratulations to Libya for making the final and they should be saluted for this,” said the coach after the 5-4 defeat.
“It’s disappointing to lose the way we did tonight. We dominated possession and had a few clear cut chances but credit goes to Libya for slowing down the game to their advantage.”
Goalkeeper Mohammed Nashnush frustrated the Warriors with his display in between the posts before going on to score the decisive spot-kick which put Libya into Saturday’s final.
“They disrupted us and defended well enough to stop us scoring,” continued Gorowa.
“Our solid defence, which has conceded only one goal so far in this competition, held on well and Libya hardly threatened our goal.
“We did practice penalties and always do, but in a match situation the pressure is different and you just can never tell the outcome.”Advertisement