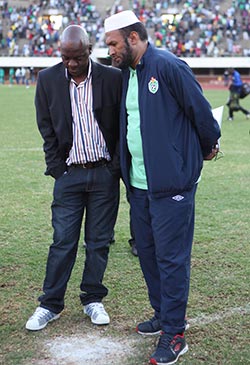 ZIFA boss, Cuthbert Dube, suggested Thursday that former Warriors coach Ian Gorowa may have been selecting for national duty players he wanted to flog to South African clubs.
Gorowa resigned this week citing differences with the national association as well as the non-payment of his salary.
He was likely to be fired anyway after the national team failed to qualify for the group stages of the 2015 Africa Cup of Nations qualifiers.
In his resignation letter published in the local media, the coach said he had not been paid for the last seven months and was also owed a bonus after taking Zimbabwe to the semi-finals of the African Nations Championship in South Africa earlier this year.
But appearing before the Parliamentary Portfolio Committee on Education, Sport, Arts and Culture, Dube hinted at concerns about Gorowa’s squad selections.
Challenged by committee chairman, Temba Mliswa, on why he appointed Gorowa who was more a player agent than a coach ahead of Norma Mapeza, Dube revealed worries about the coach’s squad choices.
“When we appointed Mr Gorowa, we did not know anything (on assertions that he was a player agent),” said Dube.
“It was only after the game against Tanzania, which was a disaster, that six players were immediately sought in South African but as Zifa we have not yet received any transfer fees and we are still going through that process.
“I regard Gorowa as a son and I had a lot of minutes with him and I told him, uri mwana kwandiri, you should guard your future with a lot of jealousy because you are still young and, as a person, you must operate honestly.
“Gorowa did a fantastic job for the nation to reach that stage, but I was disappointed with one player who was continually selected while he was not performing well.”
Dube however said he thought Gorowa had, otherwise, done a decent job.
“Gorowa … also made history by beating Zambia for the first time in Ndola; Zambia had never been beaten in Ndola for 45 years,” said the ZIFA chief.
Gorowa replaced German Klaus Dieter Pagels last July.
He lost only two of his 17 matches in charge of the team, but one of those defeats came in a qualifier for the 2015 Africa Cup of Nations against Tanzania that eliminated Zimbabwe from the preliminaries.
Before his short stint with the Warriors, Gorowa had coached South African premiership clubs Mamelodi Sundowns and Moroka Swallows, among other teams.Advertisement

Meanwhile, Dube also revealed that Zifa had dissolved all national teams.
“What I can reveal is that we have dissolved the national teams and this was done following our emergency board meeting yesterday (Wednesday).
“We now need to start afresh and should be appointing personnel to lead the teams,” said Dube.