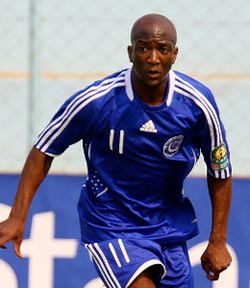 STILL reeling from the 1-0 loss to Tanzania in the 2015 Africa Cup of Nations first round, first leg qualifier last Sunday, Warriors coach Ian Gorowa has made five changes for the swim or sink return leg set for June 1 in Harare.
Gorowa’s men displayed a lacklustre show in Tanzania and he hopes the new additions could help his cause as he seeks to qualify for the 2015 continental tournament in Morocco.
Zimbabwe need to score at least two goals without reply to advance to the second round where they are likely to meet Mozambique who walloped South Sudan 5-0 in the first leg.
Should they win in that second round they will join Group E which has neighbours Zambia, Cape Verde and Niger.
After ignoring Willard Katsande, who faked an illness to attend the South Africa Absa Premiership awards where he failed to land even a single award, Gorowa has instead called up his teammate Mathew Rusike.
Gorowa handed Rusike his debut last year and will be keen to have a look at the player as the Warriors seek to overturn the 1-0 deficit.
Also recalled is Belgian-based Ovidy Karuru, Czech Republic league and cup double winner Costa Nhamoinesu and AmaZulu defender Carlington Nyadombo.

Back in the Warriors squad for Tanzania game … Ovidy Karuru