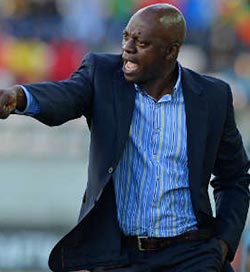 FORMER Warriors coach Ian Gorowa, has ruled himself out of the race to succeed Callisto Pasuwa at champions Dynamos.
Pasuwa quit the Harare giants late last month after guiding them to a fourth straight league title.
Dynamos have since advertised the vacant job and several foreign coaches are believed to have applied for it.
After rumours that he had also applied, Gorowa refuted the claims, saying he will never coach in Zimbabwe again.
“l never applied to coach Dynamos and I will never apply,” Gorowa told supersport.com.
“I am sure I made it clear that if I am to coach in Zimbabwe, it would be the national team and I did just that.
“Before coming for the Warriors, I had never coached in Zimbabwe before. I am now done with the national team and I fulfilled my ambition.
“I am actually waiting for Zifa to pay me my outstanding salary. If Dynamos approach me I will tell them straight away that I am not interested.”
A number of coaches have been tipped to take over the Dynamos job including former Highlanders mentor Kelvin Kaindu.
Monday is the closing date for applications and interviews begin on Wednesday with the new coach expected to be announced a few days later.