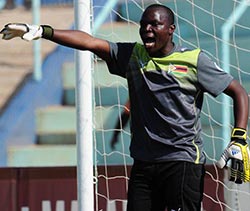 WARRIORS coach Ian Gorowa says player managers are a bad influence after several players left camp for trials in South Africa and Europe during preparations for the next month’s African Nations Championship (Chan) finals.
The continental tournament in neighbouring South Africa runs from January 11 to February 1 and could be the perfect opportunity for some of the players to launch their international careers.
But Harare City winger and 2013 Castle Lager Soccer Star of the Year first runner-up Silas Songani has left for Denmark, while Triangle’s Misheck Mburayi is on trial down South.
Kudakwashe Mahachi of Chicken Inn, towering defender Eric Chipeta, goalkeeper Munyaradzi Diya, Peter “Rio” Moyo and Charles Sibanda have all been on trial with various clubs in South Africa, joining camp a week late.
Bruce Kangwa has preferred to concentrate on his wedding.
“If that is the mind-set which they will take into our games, then there is nowhere we are going as a team,” said the former Mamelodi Sundowns and Moroka Swallows coach.
“The end of it is we will have players playing not to win matches but to impress scouts as individuals. The managers should stop putting players under pressure and let them express themselves freely and put team goals first before everything.
“If the team wins, people will take notice and we know good players are found in teams that win and this is the best and easiest way they can attract attention. But if impressing scouts becomes more important than the goals of the team, then we get into serious trouble.”
The final 23 man squad is expected to be named on Tuesday.
Provisional CHAN squad
Goalkeepers: George Chigova, Maxwell Nyamupangedengu, Tafadzwa Dube, Munyaradzi Diya
Defenders: Oscar Machapa, Hardlife Zvirekwi, Augustine Mbara, Themba Ndlovu, Partson Jaure, Eric Chipeta, Felix Chindungwe, Milton Ncube
Midfielders: Danny Phiri, Pascal Manhanga, Frankson Bushire, Wonder Kapinda, Charles Sibanda, Tawanda Muparati, Masimba Mambare, Kuda Mahachi, Ali Sadiki, Peter Moyo
Strikers: Simba Sithole (Dynamos), Simba Sithole (How Mine), Donald Ngoma and Nelson Maziwisa (both FC Platinum), Lot Chiwunga (Black Rhinos)Advertisement