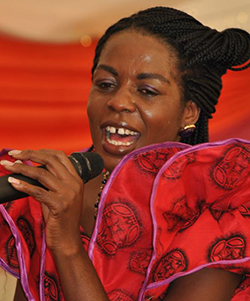 GOSPEL musician-cum-designer and dress maker, Joyce Simeti has died, close relatives have confirmed.
Simeti died in Harare, Tuesday, afternoon of heart failure.
Her cousin, Melody Shainet, told NewZimbabwe.com that the late gospel diva had been struggling with a heart ailment for a long time.
“She passed on this (Tuesday) afternoon at around lunch time, after she had gone to her work place.
“She has not been well for some time with the heart problem which was attacking her on intervals,” said the late Simeti’s cousin.
Fellow musician, Derick Mpofu, said he had lost a mentor and a “big sister”.
“I knew Joyce Simeti as a big sister and worked with her from 2005 when I left school,” said Mpofu
“She taught me how to play keyboards and some vocals and she mentored me to become a fully-fledged artiste on my own.
“We also worked together as a coalition of artists known as Christian Entertainment with the likes of the Mahenderes, Bethen, Sam Rapoz and Baba Manyeruke.
“She was ever smiling and a bubbly infectious character and will be sadly missed.”
Born in Mutoko, Simeti, recorded her first album ‘Tose Takadanwa’ in 2002 with Ngawongwe records.
She had more than seven albums to her name among them, ‘Ndichamupa mbiri’, ‘NaMwari zvinoita’, and ‘Haakusiya Haakurase’.
She was married to Stanley Simeti and the couple had three children – two girls, and one boy.Advertisement