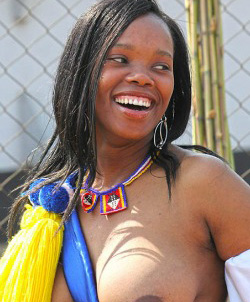 THE Censorship Board has banned a bare breast exhibition by a Bulawayo based photographer and author.
Crispen Nldovu said the exhibition, which would have women showing off their bosom, was meant to celebrate the African culture, where women used to walk topless in the olden days.
The exhibition was also meant to coincide with breast cancer awareness month.
Determined to hold the exhibition, Ndlovu formally wrote to the censors in June seeking clearance.
Ndlovu intended to hold the exhibition from July 28 to August 3 at the Bulawayo National Art Gallery.
But, in a letter to Ndlovu, the censors said the exhibition had been banned and prohibited in the country.
“Please be advised that the Board was convened to consider your application and recommended that the exhibition be banned and prohibited in Zimbabwe for the showing of bare breasts in Zimbabwe,” said Issac Chiranganyika, the board’s acting secretary.
In an interview with NewZimbabwe.com, Ndlovu said the decision to ban his show was a political move meant to silence the voice of the people.
“This is a political move that is meant to silence people who are not in favour of the government of the day.
“Mbende Jerusalema dance, which is being done by primary school pupils is even worse that what the exhibition intended to showcase,” said Ndlovu.
He said there was need to reform the board as it was now old fashioned and not in tune with the current trends.
The board has in the past banned artistic works in the country, including Owen Maseko’s Gukurahundi inspired exhibition.