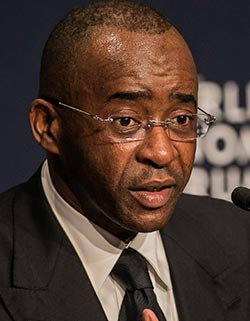 GOVERNMENT through the Broadcasting Authority of Zimbabwe (BAZ) has banned the new pay per view broadcaster Kwese TV after it announced to locals that it was now available in the country.
Kwese TV, owned by Strive Masiyiwa’s Econet Media, was announced two years ago and has already launched in some African countries.
For the last two days, a message has been going around through Econet mobile subscribers with Kwese TV advertising its packages. “Kwese initial $49 and get free installation, monthly subs $29, weekly subs $9 and three days $5”.
The new pay-per-view broadcaster is expected to bring Pan-African Boxing Explosion to be held next Friday at the Rainbow Towers Conference Centre in Harare.
The boxing event will see some boxers from across the African continent exchanging blows for titles across all weight classes.
But late Wednesday night the BAZ announced that the authority has not issued a licence to Kwese TV to operate in Zimbabwe.
In a statement, BAZ CEO, Obert Muganyura, said in terms of the Broadcasting Services Act [chapter 12:06], no person shall provide a broadcasting service in the country other than in accordance with a licence issued by BAZ.
“The content distribution licence issued to Dr. Dish, which was specific to the provision of the My TV Africa Service, as declared by Dr. Dish in its application and stated in the terms and conditions of the licence, was cancelled by the authority for failure by Dr. Dish to provide service,” said the statement.
“BAZ, therefore, wishes to advise the public not to invest in a service that cannot be provided without a licence and warns anyone who may contemplate providing an unlicensed broadcasting service to acquaint themselves with the course of action that the authority is bound to take in terms of the law,” said Mr Maganyura.
Kwese TV entered Zimbabwe through an Econet Media partnership with a company called Dr Dish.
Dr Dish is licensed with BAZ and will see the company distribute Kwese content via a deal struck with Econet Media in 2016.
Kwese TV, sometime back, announced that they also had rights to broadcast NBA and Aussie cricket (in Australia) as well as Euro2020 and World Cup 2018 rights.
Masiyiwa has been exiled since the turn of the century. His Econet company was licenced after a long battle with the state in the 1990s.Advertisement