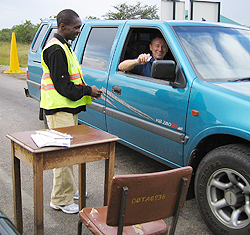 ZIMBABWE is looking to adopt electronic tolling technology similar to that used in neighbouring South Africa as the cash strapped government plans to put up  an additional 30 toll gates on its highways and in urban areas to shore up revenue streams, an official has said.
Currently Zimbabwe already has 24 manual toll gates on its major highways.
Transport minister Obert Mpofu told The Source on Monday that government was considering to adopt an electronic tolling system.
“We want a system that is easy to implement and administer. We are still looking at the various options available but we are most likely to go the electronic route,” he said.
Zimbabwe National Road Authority (ZINARA) chair Albert Mugabe last week told a parliamentary committee on local governance that the e-toll rates would be different from the current regime.
“We appreciate that motorists are already burdened by heavy taxes, but because we are considering an e-system, it is possible that the toll will not be in the denominations that are available of a $1 or 50 cents,” Mugabe said.
“An appropriate toll can actually be put forward after consultations and engagement with stakeholders, including the local authorities.
“If it’s an electronic system, it’s easy to say $0.15 or $0.10 to go through. Cumulatively, it becomes a figure that greatly enhances and improves what we do on the road network.”
Zimbabwe introduced toll gates on its national highways in 2009 and collected about $15 million from motorists in the year to August 31, 2014.Advertisement