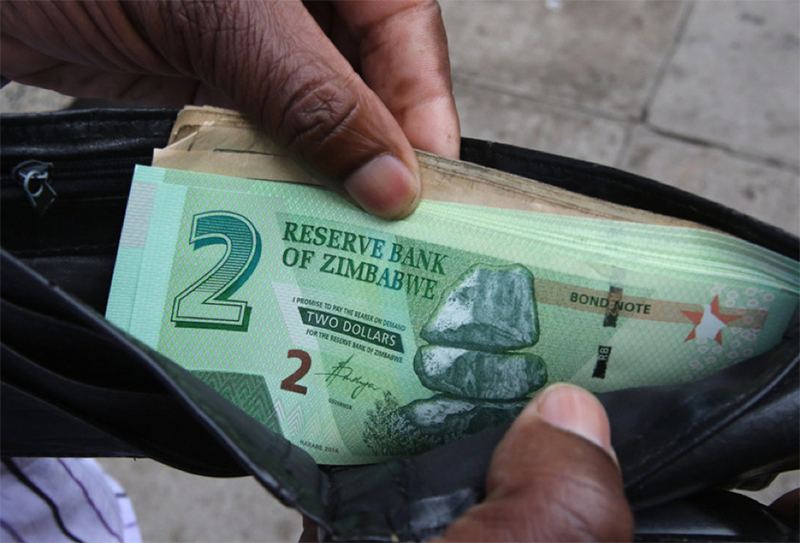 HARARE: The central bank finally conceded on Monday that its controversial bond notes, which were initially pegged at the same value as the dollar are not equal to the greenback.

This, after it directed banks to open separate accounts for local and foreign currencies in a fresh attempt to solve the country’s cash crisis.

The move was part of a host of policy reforms announced by central-bank governor John Mangudya to address the country’s liquidity crisis which has seen a shortage of cash in banks, while US dollars, the South African rand and bond notes are easily available through street dealers.

Bond notes are a controversial surrogate currency first introduced in 2016 as an export incentive, pegged to the value of the US dollar but this has become an untenable situation that has created widespread trading of foreign currency on the streets, where the rand and the US fetch high premiums in exchange for bond notes, which are used for day-to-day transactions.

Companies in need of foreign currency also take to the streets as government has hardly enough forex to distribute into the economy.

Effectively, Zimbabwe has a complicated three-tier payment system which involves trading dollars or rand for bond notes, dollar or rand for RTGS and the bond notes for RTGS. All these transactions are completed for varying prices.

“As a further support to this measure and to provide credit enhancement or deposit protection for the nostro FCAs, the reserve bank is finalising discussions with the seven African Export and Import Banks towards a $500m nostro stabilisation guarantee facility (NSGF) to provide nostro FCA holders with assurance that foreign currency shall be available when required by them.”

He also imposed a ban on truckers, who come mainly from SA, from buying fuel in Zimbabwe in local currency as the price disparities made Zimbabwe’s fuel the cheapest in the Sadc region.

Although Zimbabwe’s cash crisis has caused pain to its citizens, it has also brought the positive effect of increased usage of plastic money and Mangudya revealed that electronic transactions in the retail sector amounted to 95% of all sales.

“Government will continue to invest heavily in expanding the electronic payment infrastructure, as the economy continues to move towards a cash-lite society,” Mangudya said.

Commenting following the monetary-policy statement, economist Chris Mugaga said: “It was a quasi de-dollarisation. He (Mangudya) separated nostros and RTGS. It shows that he has accepted, in a subtle way, what everyone knows as fact, bond notes cannot pegged at the same value as the dollar.”

Zimbabwe officially does not have its own currency, after the country experienced an economic disaster in 2008 that resulted in the second-highest ever inflation rate in history of 89 sextillion percent, leading to the adoption of multi-currency system dominated by the dollar and the rand.