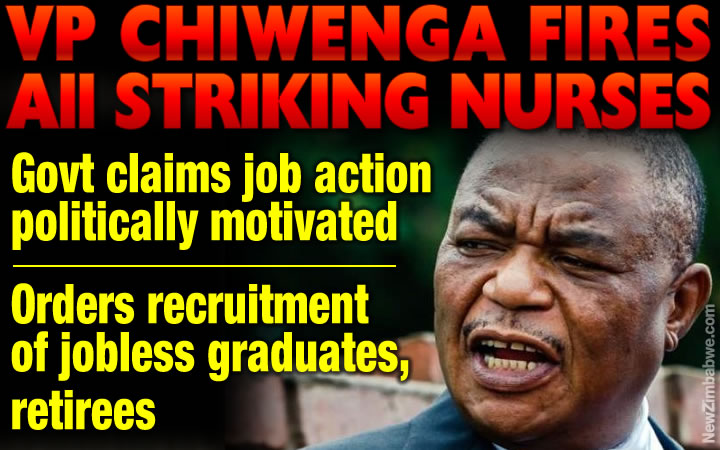 THE government has fired all striking public hospital nurses with immediate effect and ordered the prompt recruitment of unemployed graduates to replace them.

The drastic action which might worsen the crisis in the country’s public health system was confirmed by Vice President Constantino Chiwenga Tuesday evening.

Nurses went on strike Monday to press the government to pay them allowances and to protest a flawed system for grading salaries.

Chiwenga said the nurses had continued with the crimpling job action despite the government releasing funds to pay their allowances in line with a deal reached Tuesday.

“What makes the whole action both deplorable and reprehensible is the fact that, as agreed, Government today released and transferred a sum of $17 114 446 into the account of the Ministry of Health and Child Care for on-payment to the striking nurses,” said the vice president.

“Government now regards this lack of remorse as politically motivated, and thus as going beyond concerns of conditions of service and worker welfare.”

Chiwenga continued; Accordingly, Government has decided, in the interest of patients and of saving lives, to discharge all the striking nurses with immediate effect.

“Further, Government has now instructed the Health Services Board to speedily engage, as appropriate, all unemployed but trained nurses in the country.

“It has also authorized the Board to recall retired nursing staff into the service.”

At least 16,000 nurses are employed by the government, according to the Zimbabwe Nurses Association (ZNA).

NewZimbabwe.com could not verify how many nurses could be drawn from the retired pool.

The strike has left public hospitals understaffed and follows a month-long walkout by junior doctors that ended on April 2.

A visit to Parirenyatwa Hospital in Harare showed the situation was quite desperate with only critical patients being admitted while many others were discharged with most departments closed.

In Bulawayo, Mpilo Hospital closed its outpatient department and only attended to emergency cases, according to an official memo to staff.

The lowest paid nurse reportedly earns a gross monthly salary of $284 before allowances.

ZNA was members to be paid other allowances they say were promised by the government in 2010 but never honoured.

Meanwhile, Chiwenga said the funds which were meant to be released to the striking nurses would now be used to recruit new staff.

“In the meantime, government pays singular tribute to all nurses who have loyally remained working and to all those senior nurses who have heeded its call for them to return to work,” he added.

“Their commitment to duty and patience pointing to a deep regard for life as required by the professional oath is noted and much appreciated.

“Government also appeals to all those visiting public institutions to exercise patience while services are being restored to normalcy.”