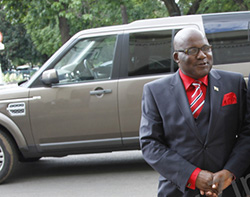 MUTARE: The government is contributing to the collapse of the local motor industry as it continues to import vehicles, shunning local companies, in the process exporting jobs and the much-needed foreign currency.
This came out during a recent visit to Quest Motor Corporation’s assembly plant in Mutare by the Parliamentary Portfolio Committee on Transport and Infrastructure Development.
Quest Motors director Tarik Adams told the committee that government had proved to be a major obstacle in their quest to revive the local industry.
“Government is our impediment because they are failing to protect and incentivize the local motor industry. It’s high time government leaders should walk the talk,” said Tarik.
He said the numerous visits to the company by top government officials including Vice Presidents Emmerson Mnangagwa and Pelekhezela Mphoko had failed to bring positive results.
Last year, Zimbabwe Revenue Authority (Zimra) boss Geshom Pasi also toured the Quest plant.
“We had numerous visits by government top officials but nothing has changed. They just promised to do something after the tour but nothing, absolutely nothing has changed.
“We continue to see imports by government of the same makes which we are assembling here,” said Tarik.
He said unless corruption was tackled at some government institutions, there was little prospect of reviving the car motor industry.
“Schools are getting duty free certificates and some people at the Ministry of Industry are getting some bribes and issuing those certificates
“People are running away from paying duty and the country is losing out through shady deals,” said Tarik.
He said government is good at coming up with good policies but poor on implementing them.
Tarik cited Zimbabwe United Passenger Company (ZUPCO) which he said recently imported a fleet of buses from India at the expense of local companies.
“There were no reasons why ZUPCO went to India to import substandard buses yet we are assembling quality products here. The country lost revenue and exported employment,” he said.
“It’s as good as we are competing with the same government yet we should work together and boost our economy. It’s a sad story.
“I don’t care whether it’s Willowvale or any other company awarded the tender as long they are promoting our local industry.”Advertisement

Portifolio Committee on Transport and Infrastructure Development chairperson and Chegutu West legislator Dexter Nduna said their visit was aimed at enhancing the Buy Zimbabwe campaign.
“Our visit as a committee was to see how we can best enhance local participation. We take no prisoners and our role is to ensure that government creates an enabling environment for local companies to thrive,” said Nduna.
He said they will take their observations to parliament, adding that the era of not implementing blue prints should come to an end.
“The issue of not implementing blueprints should come to an end,” said Nduna.