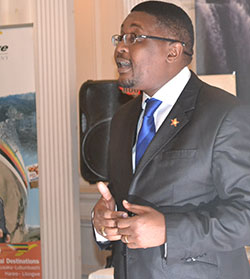 GOVERMENT will set up a $200 million fund to recapitalise the tourism industry and rehabilitate infrastructure, a government official said on Thursday.
“Government has identified tourism as one of the key enablers to the growth of the sector and will soon avail a $200million loan facility for recapitalization projects,” said the permanent secretary in the Ministry of Tourism and Hospitality Industry, Florence Nhekairo.
She was addressing delegates attending the annual Hospitality Association of Zimbabwe (HAZ) congress in the resort town.
Nhekairo said the ministry was consulting Treasury for the extension of Statutory Instruments 124 and 199 of 2012, which allows goods imported by tourism operators to enter the country duty-free.
Meanwhile, tourist arrivals to Zimbabwe are seen increasing by 50 percent to three million by 2017, a report by an independent financial advisory company based in United Kingdom said.
The Economic Intelligence Unit said Zimbabwe, which attracted two million visitors in 2012, was the second most popular destination in southern Africa after South Africa.
South Africa received above eight million tourists last year and the figure  is expected to spike to more than 10 million in 2017, the report said.Advertisement