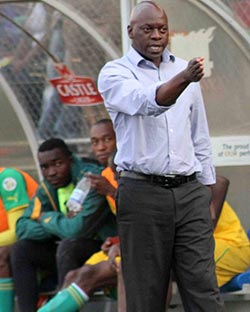 THE government has pledged to contribute US$88,000 towards the Warriors’ preparations and travelling expenses to the African Nations Championships (Chan) finals which start in South Africa on January 11.
Sport, Arts and Culture Minister Andrew Langa, confirmed the support when he hosted a luncheon for the Warriors on Monday.
The minister however, underlined the need to ensure assistance for future national team assignments is offered well in advance of key tournaments.
“In future, we will do things on time and not in the eleventh hour. We are very sorry about that,” he said.
The Warriors have spent the past few weeks preparing for the CHAN finals.
Langa commended the “dedication” shown by the Warriors technical department and players that are in camp.
The Zimbabwean squad of locally-based players is expected to be trimmed down on Tuesday or Wednesday ahead of their departure for South Africa next week.
They will play Gabon in Johannesburg before heading to Cape Town.
Meanwhile, Sunday’s match against Libya has been called off, Zifa said.
“We have received communication from the Libya Football Association that they have failed to secure tickets for Harare and therefore the match is off,” said Zifa communications manager Xolisani Gwesela.Advertisement