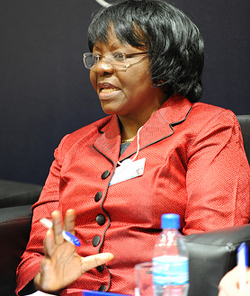 MUTARE: Manicaland is set to access $3 million from the $7 million loan which was secured by government from OPEC Fund for International Development (OFID) to finance Small to Medium Enterprises (SMEs).
This was said by SMEs minister Stembiso Nyoni while addressing a business meeting in the eastern border city recently.
Nyoni said SME’s play a critical role in economic development and government has found it necessary to secure a loan to boost the sector.
“Government has secured $7 million towards the development of the SME sector. The funding has been approved by the parliament,” the minister said.
The minister said the funding will benefit three provinces namely Manicaland, Matabeleland North and Masvingo.
She added that Manicaland province will get the large chunk of the funding amounting to $3 million due to high number of SME’s operating in the province.
“SME’s will be put into groups and each group will receive $50 000. The fund will be accessed by serious and registered business people only because it will be paid back,” said Nyoni.
She said SMEs reduce the rate of importation by producing and manufacturing goods locally.
“Manicaland have proven to be a hub of SME`s and therefore it deserves an opportunity to access the funding,” said the minister.
Nyoni said SME’s have the potential to create employment if they are adequately funded.
SME’s interviewed said they hoped the funding will be distributed in a transparent manner to deserving small businesses.
Advertisement