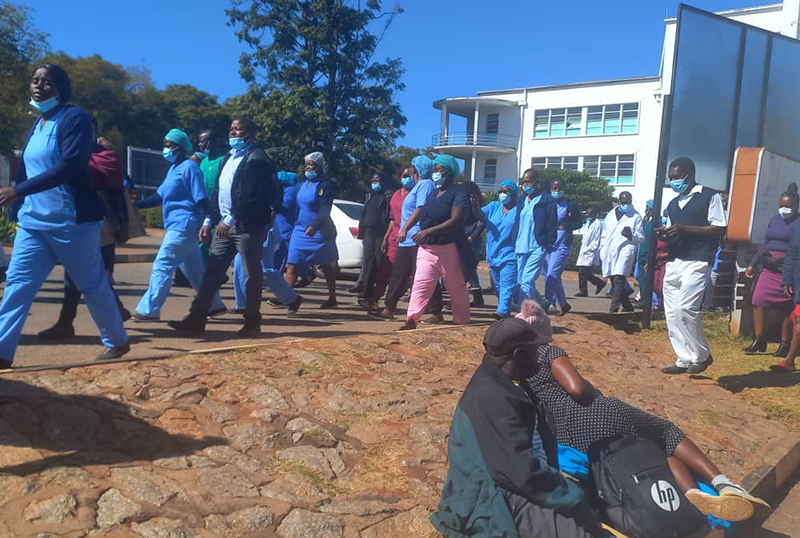 State health workers this Monday embarked on an indefinite strike saying their wages salaries have been eroded by inflation.

They rejected a 100% salary increase offered by the government saying this was below inflation which is now around 137%.

Civil servants are also demanding to be paid in US dollars.

In Harare nurses and doctors at Parirenyatwa spent half the day Tuesday singing and marching around the hospital as patients lay unattended outside the hospital.

A critically ill patient was seen lying at the entrance of the outpatient department after failing to get any assistance.

Nurses were demonstrating against their employee right in front of her.

“I was here at 5am to beat the winding queues but I did not get any assistance,” she said.

“We were told that we should go home because doctors are on strike and no one would attend to me.”

The striking nurses informed union leaders that they were being threatened by matrons for withdrawing their services.

“We have been told that a register of attendance is being marked about three times a day and we fear that we will be fired,” said a nurses who works in the main hospital.

In response Health Apex Council secretary General Lloyd Sarai said there is nothing to fear.

“That should be expected; and besides it is their job,” he said.

“But we should not be deterred because these are casualties. We are in a struggle for money. We know some were fired on TV but they are still at work

“There is no crime of misconduct, they will simply call us for disciplinary action and we have never heard of anyone who was fired for misconduct.

“So fear not, let us remain resolute dear comrades.”

The health workers promised to march and take their petition to the Health Services Board again on Wednesday.